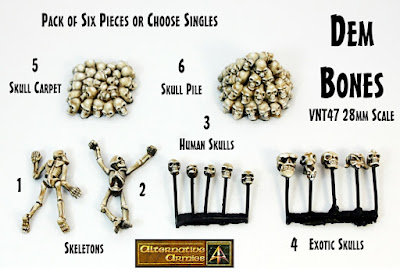 Our last release for the month. During the month of October 2021 a firm favourite pack in the HOT 15mm Fantasy Range is included for free in every order going out.  A lovely treat and now for those 28mm players feeling left out we present the larger scale new Dem Bones!  A pack of six pieces or single pieces or saver bundles of ten.  Go to the

“Bones of the ages.  Moldering and piled deep.  Such bones are war’s earnings.”

VNT47 Dem Bones: In the pack there are two different Skeletons (28mm scale) one face down and the other face up.  There is a sprue of five Human Skulls (all are different), a sprue of five Exotic Skulls (Big, Bestial, Primitive, Demonic and Monster).  A Skull Carpet which is 25mm square that can be a ’tile’ or can be a ‘base’ for a miniature.  Lastly a Skull Pile which is 30mm wide and 20mm tall representing the heaped heads.  The set of six is in the pack and on that page HERE you can also choose any part of the pack in any quantity.

Each of the Dem Bones models is also on our website in a ‘saver bundle’ of ten identical pieces (each sprue counts as one piece) with a saving applied on screen (these also offer the piece as a single too).  This is great for those wanting to really decorate their tables, base up their figures or have a mountain of skulls in their possession. 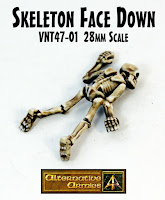 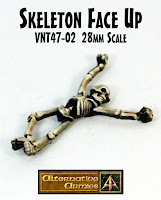 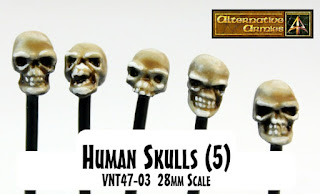 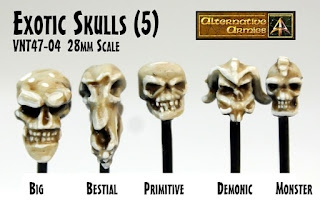 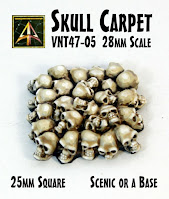 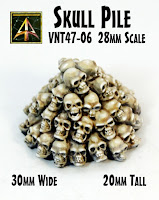 Get your bones onto the table and bring fear to the foe! 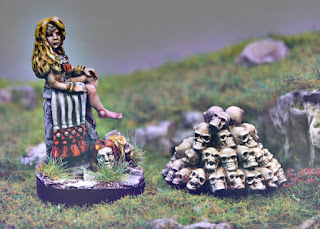 Dem Bones is really useful from Fantasy to Science Fiction and any Historical system too they will fit into almost any setting with ease. As an example here is the deadly and beautiful Babd Macha collector of heads (CM24-03) next to the new Skull Pile amid the mists of Erin. Erin Celtic Myth Range.  Splendid stuff.