I’ve been busy painting all sorts of stuff on the commission side of things but I’m still slowly expanding my Urban War strike team as well. I think this project interests me more than anyone else really but I’m sticking with it.

Recently I finished painting up my first named character and commander for the team, Lieutenant Johnny G. This model was originally released under the Void line but was one of a few that were transferred directly over into Urban War. Really nice sculpt and it’s great to finally have a proper command model in the mix.

I also started work on a special forces trooper. I’ve got two of these guys and a sergeant I want to add but they sat for ages gathering dust because I wanted to paint them in camo but wasn’t sure how to tackle it. I must have made four attempts on one model and just wasn’t happy with either the colour or my execution of the design. I had a few drinks, picked up one of the other models and the camo came together instantly! Here’s a WIP courtesy of Vallejo paints and Smirnoff vodka. 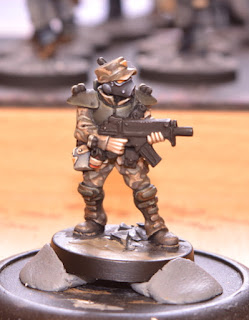 I have since done a bit more work on him and may actually get him finished later tonight. Hopefully the second trooper will come together quickly now I know what I’m doing with the colour scheme. I think I might put the sergeant off until a little later though as I’ve got another model I’m really keen to get painted.

One support trooper I was short of is a colonial marine heavy gauss rifle gunner. I think these weapons fall somewhere between a standard gauss rifle and a heavy machine gun. There are two models available with HGRs but they’re later sculpts and as such they don’t quite match up with my preferred earlier models. Of course the only option was to convert a model. 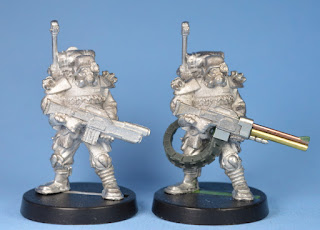 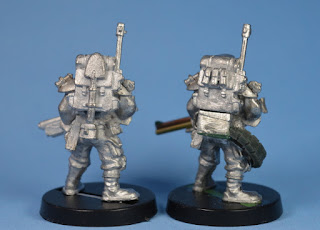 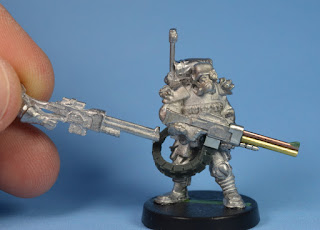 Obviously the original sculpt is on the left and in the third pic you can see the HGR from a saurian mounted marine that I modelled my conversion on. Easy enough job to cut the end of the rifle off. The gun barrel is a piece of brass tubing, the bit above it is piece of a Bripping Beast wire spear (bought a pack years ago and have been mostly using them as pins) with a Green Stuff iron sight. The hand grip below is a pin with three strips of pewter sheet wrapped around it. I also used pewter sheet for part of the housing and to cover the ammo feed.

The ammo belt is a flexible resin one from Zinge Industries. It’s kind of a rubber material with a piece of wire in the middle to help pose it. I stuck it in place with super glue which really sticks the material well but I did have to make a few attempts at it as I’ve got quite a tight coil there and being rubbery it needed a bit of careful securing so as to not twist and warp too much. To attach it to the gun I cut away the top face of the metal magazine which was a real ball ache. I then cut half of the rear of the end ammo belt block away and then that married up nicely with the gun. The pewter sheet cover tidied it up nicely.

The ammo box on the back required one of the packs to be cutaway from the model. Easy job. The box itself was made from two bits of thick metal sprue from a set of Junkers back packs (an opposing faction in Urban War for those not familiar with the game). I had to rip it off after fixing it in place though as the ammo belt didn’t fix securely initially. I ended up cutting a chunk out and gluing the belt into it. For the sake of neatness I put a piece of pewter sheet over the front of the box and it covered the belt join. I also added a bit of lid detail with more sheet material. A bent pin made a good handle too.

I’m not much of a converter but I’m really pleased with how this has come out and I think once painted it’ll look the part. So there we go, that’s my strike team update. Still more models I really want to add, not that many to be fair but I am a bit slow to get these done so I’m sure it’ll take a while to get the team ‘finished’.