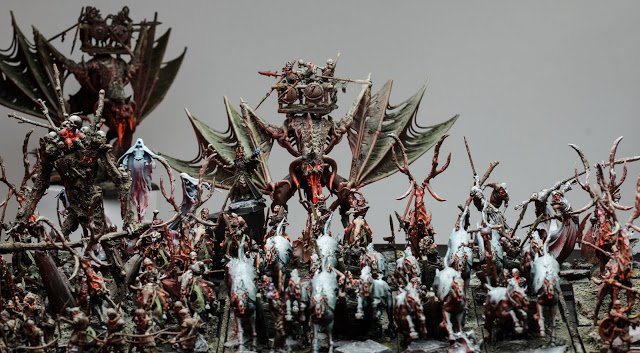 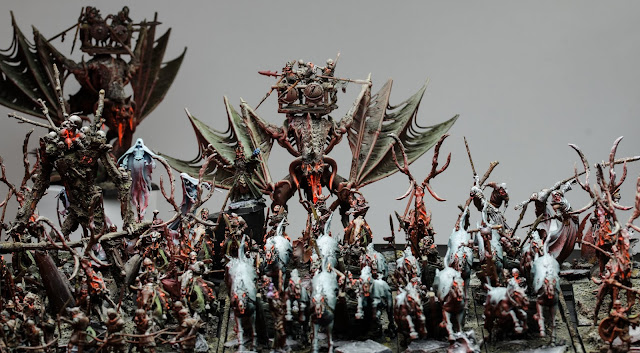 this is One of my first themed armies – a “Draugr” army. Undead with influences from viking mythology

Formulating and establishing main characteristics,
getting a clear vision of what I want to achieve, helps tremendously on the rest of the project. This does not mean setting everything in stone. Many strong characteristic you will like will come at later stages of the process and you want to remain open minded to include new ideas. But I recommend to take the time to figure out the initial inspiration, the main characteristics.

From my own experience, and maybe some of you can relate, I know that this can be daunting.
A vision or inspiration can be so clear, detailed or extravagant, that I shy away from it because I think I’ll never have the time, the skill or the stamina to achieve it. Especially achieving the result in the quality I envision.
And in this occasion, also from personal experience, I want to argue in favour of the idea. Our own expectations are often beyond our current skill level. And this is a good thing. This is how we learn. We try and we fail. And then we try again and fail a little less.
“Anything worth doing is worth doing badly.”
– G.K. Chesterton
Now you can say that when I fail at something in an army project, it is a bit more dramatic, as it is such a large and often expensive project. But even that, in my experience, is not as dramatic as it might seem.
The most outstanding armies or warbands I came across were not the flawlessly painted ones. It were the ones with the creative ideas and very often the ideas were not executed nearly perfectly but they were well-thoght-out, executed creatively and most importantly, it was transported clearly in the army.
And this brings my to the other important element for the creativ concept:

How do I make my idea readable?

Basically this means: “How can I set my army up to show my idea in the most clear way and make it easy for the viewer to see it?”
Readability is an important aspect of all of (miniature-)art. But  as we are also developing an army or warband designed for the gaming table, readability gains some unique facets.
So I want to start of by naming a few examples of aspects that should influence our decisions on readability:

Those are all facets that influence our take on readability:

So how can we plan readability for our project under all these aspects? Through one of the most renown expressions in miniature art: Through contrast. Contrast and “eye-catching.”
So what does “eye-catching” mean?
It means we want to actively plan and develop areas of interest in our army and units to draw attention to. This will make it easier for the viewer to get an impression of our idea. With such a high model count, the viewer can easily get lost within the army and miss areas we invested much of our time in. Therefore we want to actively draw his attention to the interesting areas.
On the other side, this means we also don’t have to invest so much time on areas, the viewer will never concentrate on.

The most important tool we have to draw attention is “contrast”.
Contrast means a difference or opposition. We can therefore draw attention to an element by making it different in an otherwise homogenous group. This can be implemented in many ways, like, colours, shapes, sizes, dynamic, etc.

So how do we implement contrast in our plan and concept?
When planning our army we should dedicate certain bearers of our ideas. While the majority of models should incorporate the foundation of our idea (like undead with viking flair) we can dedicate detailed ideas to those “bearers”.

The other important element to use contrast for eye-catching is model size and position. The larger the model is in comparison to the rest of the models, the easier it s to draw attention to them. And these are the models we want to carry our best ideas. And also the models we want to spend most of our time on.
With same-sized models organised in units we want to concentrate on front-row models, as they are easier to see. On models in back-rows we can develop several subtle areas of interest on the upper halves of the models, as the lower halves are not or hardly visible. This is not as extreme in games with loose formations, such as Warhammer 40k or Age of Sigmar, but the concept translates nevertheless. Models in the front will be catching the first gaze of the viewer and his gaze will wander off to the rest of the unit from there.

There is, however, a tightrope walk with all the contrast, as we generally want our army to give an impression, that they belong together. Too much contrast, especially regarding colours, might interfere in that. My suggestion here would be to implement a feature or color that connects every model of the army. In the Draugr army for example, I gave all models an orange glow to connect them visually.

Of course there are many more ways to draw attention, other than contrast, but in this article, I just want to commit to one further, important way, as we are mostly dealing with humanoid models: Faces.
In our social life we are subconsciously trained to concentrate on faces and interpret facial expressions. This transfers also into the miniature world. Whenever we look at largely humanoid models, our gaze will always be drawn to the face. And we will try to interpret much of his story through his expression.

This means, in our concept, we should plan to lay detail and effort into faces and facial expressions. This is also a good way to place subtle areas of interest into back-rows, as faces will be quite visible in the back rows: 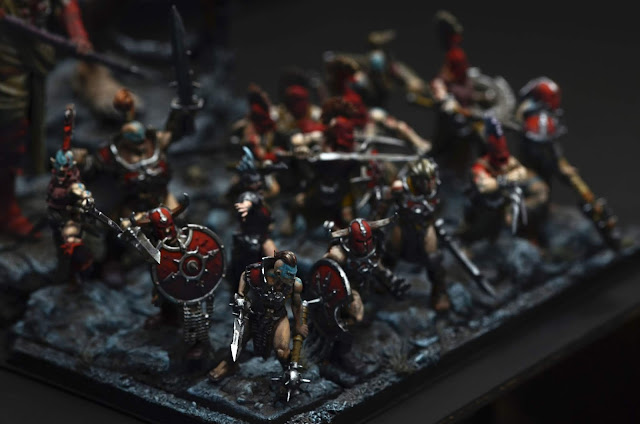 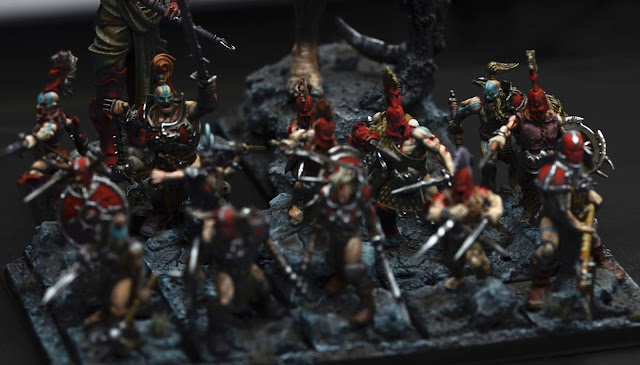 I also used the blue face paint to connect models in the army. For example this “Forsaken One”, a mutated beast, that was once a man and also the “wretched ones”, lesser mutants, are still painted with warpaint, as they are still regarded as a members of the tribe: 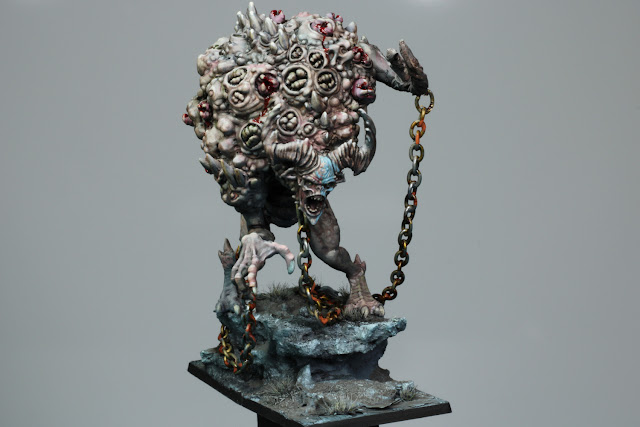 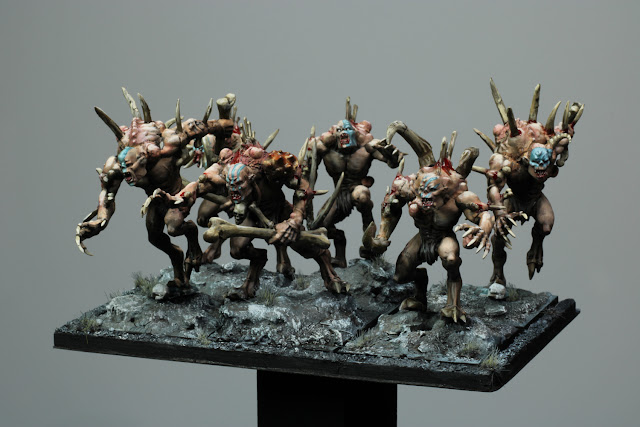 With this I want to conclude with my take on the, in my opinion, most important aspects of the concept and planning stage of an army project. I understand that this article was more applicable to armies, but I hope that also players of skirmish games can use the one or other thought of it and apply it to their next warband.

I hope you like it and will stick around for the next part of the series,
when we have a look at basing a whole army…

Thank you for reading and until next time, 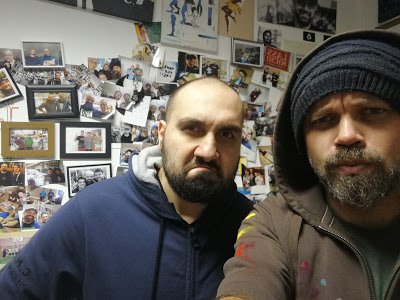 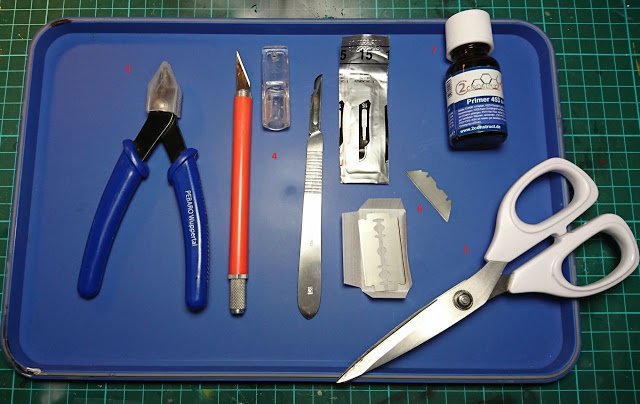 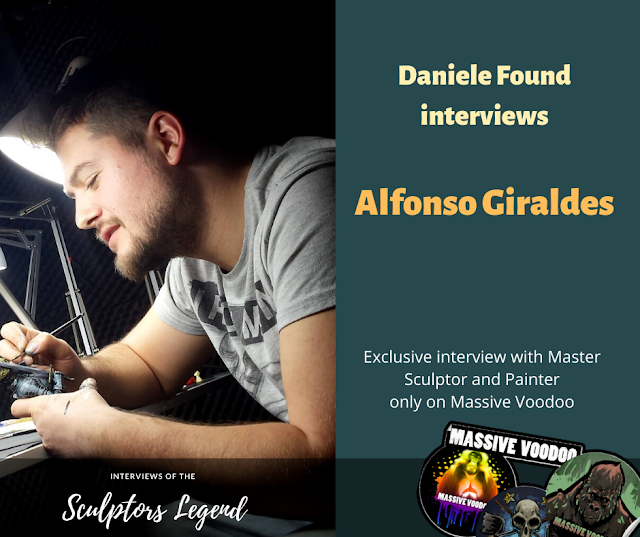