Announcing a New Campaign for The Lord of the Rings: Journeys in Middle-Earth 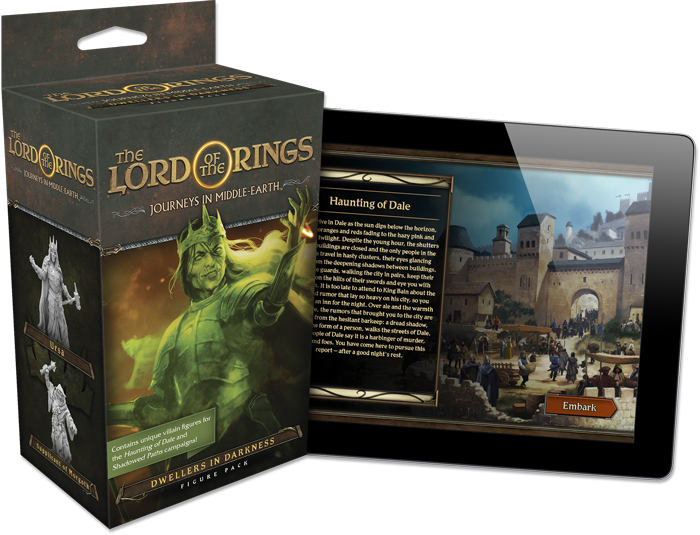 “Then the people of Harrowdale shut fast their doors and shroud their windows and are afraid. But the Dead come seldom forth and only at times of great unquiet and coming death.”
–J.R.R. Tolkien, The Return of the King

The road of your journey has led you this time to the Kingdom of Dale. A shadow has risen over this great realm of Men, and now King Bain must call upon heroes in order to investigate disturbing rumors and restore peace to his kingdom. It is once again time for a new adventure.

Fantasy Flight Games is pleased to announce two new products for The Lord of the Rings: Journeys in Middle-earth:

Haunting of Dale is the second downloadable campaign available for purchase through the Journeys in Middle-earth companion app, offering a completely new set of quests and challenges that require both the Core Set and the new Shadowed Paths expansion to play. With thirteen new adventures and a branching storyline full of mystery and intrigue in and around the Kingdom of Dale, the trials presented by this campaign are sure to thrill even the most experienced Fellowship.

Meanwhile, the Dwellers in Darkness Figure Pack can be used to enhance both the Shadowed Paths campaign and the new Haunting of Dale storyline. This pack contains three beautifully sculpted new miniatures of the iconic villains from the two campaigns, an additional copy of the Knife item with new upgrades, a new trinket with its own upgrades, and three brand-new titles to enhance your Journeys in Middle-earth adventures. 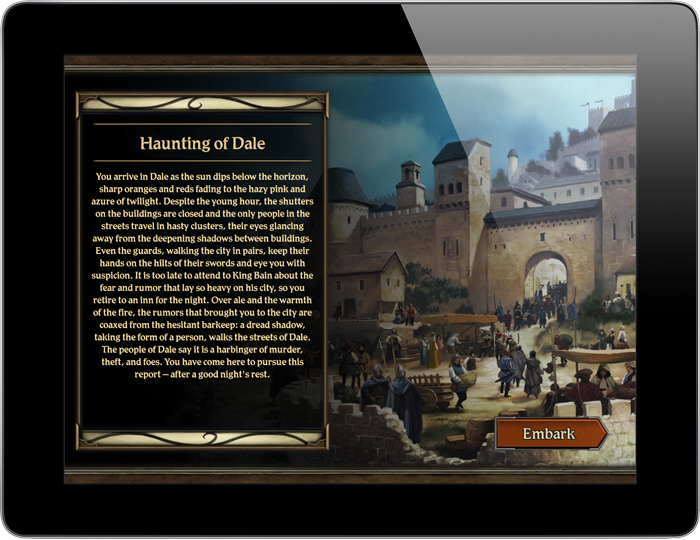 A Shadow in the East

The party has been summoned by King Bain, son of Bard the Bowman and current ruler of Dale. Concerning rumors have emerged of a dangerous shade stalking the land, cattle have been vanishing or turning up dead, and tensions are rising with the neighboring Dwarves in Erebor. At the behest of King Bain, you must convince the council of Dale that you are capable of investigating these rumors and—hopefully—able to combat the shade as well. However, time is of the essence, and there are more rumors than you will have the opportunity to chase. 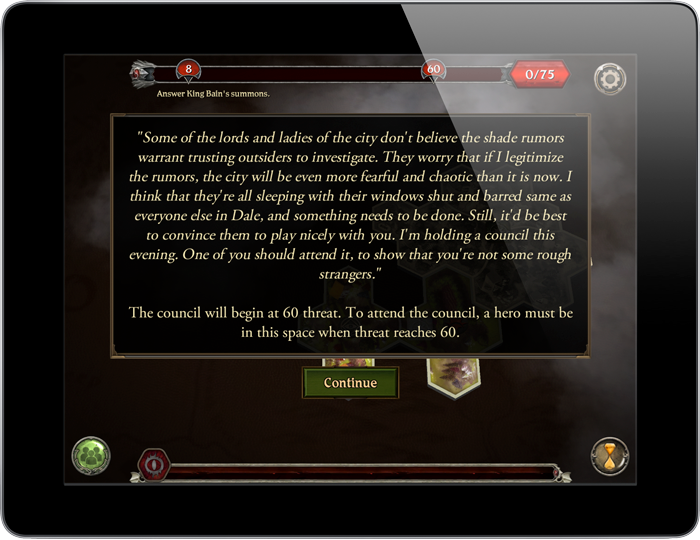 In Haunting of Dale, players will learn of multiple rumors regarding the shade and other events surrounding the region of Dale. They will need to decide which rumors to pursue, knowing that they cannot pursue all of them in a single playthrough. Depending on which leads they follow, the players will explore not only Dale and its surrounding farms and wilderness, but also the neighboring Erebor, where the party can seek the shade while gaining the friendship of the Longbeard Dwarves. These multiple branching paths make every playthrough of the Haunting of Dale campaign unique, allowing players to return to Dale again and again for plenty of thrilling adventures. 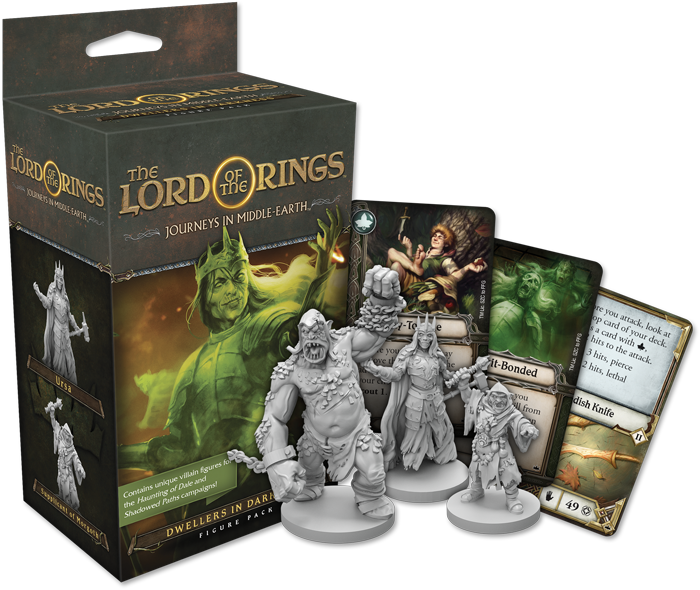 Whether you are tackling the new challenges of Haunting of Dale or reexploring the trials of the Shadowed Paths campaign, you will face off against powerful villains, such as the Supplicant of Morgoth and Ollie the Troll. With the Dwellers in Darkness Figure Pack, you can bring those villains to life with new premium figures, along with one for the mysterious and sinister shade featured in Haunting of Dale.

Against such powerful foes, the party will need to be extra prepared. Fortunately, Dwellers in Darkness also includes a fresh batch of gear, including an additional copy of the Knife item (and new upgrades for it) and a brand-new trinket in the form of the Silver Circlet. Combine these useful tools with three new titles—such as Undying—and your party should be more than prepared to tackle the challenges presented by the darkness.