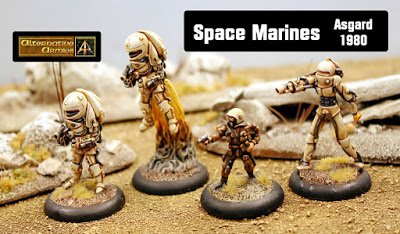 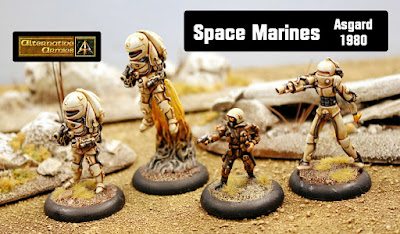 Some of the first and finest 28mm scale Space Marines ever made (to us anyway) with a classic style all of their own. We are delighted to announce new improved pictures of the entire SM code series by Asgard.  Single miniatures and a value pack of all of them with a saving.  On top of this we also have a few scaling shots as well and a line up of the restored HA code series of Space Adventurers and Pirates.  See them all

Originally made in 1980 for the Combat 3000 and then Laserburn rule systems (also coming out in 15mm scale too a bit later) Alternative Armies brought these miniatures back to the world a few years ago.  We had been asked for larger images and now this has happened.  Each miniature has a front and rear view. 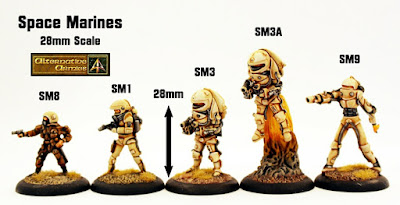 There are thirteen different figures from unarmoured Space Troopers and an Energy Mortar to light armoured and then battle armoured Space Marines including one in flight on a pillar of flame.

We are restoring the HA series of Space Adventurers and Pirates and above is what we have thus far to offer.  Also a scale shot alongside SM codes for comparison.

Go along to the website to see all that there is.  In addition to the Asgard range we also have the huge Ion Age 28mm range and the Alternate Stars 28mm range of character miniatures. Not to forget the Loud Ninja Games and Ganesha ranges of 28mm science fiction. Plenty to see and to use with any game system so we have been told.