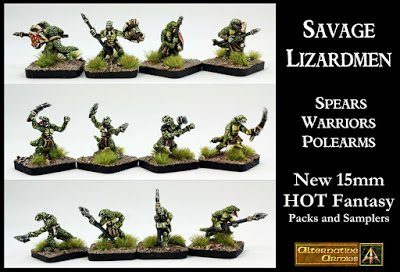 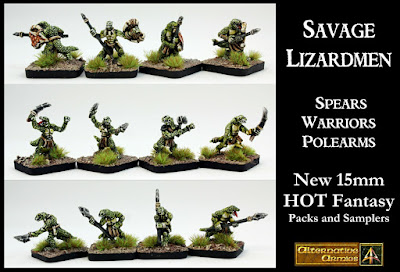 “Arid land of rocks and sand giving nothing for free except pain and misery.  From this land and its caves came the savage tribes of Lizardmen for whom war is constant need of life; for who controls scarce water controlled existence itself.  All would have continued thus but for travellers who, as they were tortured and then consumed, let it be known that richer places lay over the blistering horizon.  Places to be conquered.  Places to be ruled by the tribes.”

Alternative Armies is delighted to present the first three codes in a brand new army which will expand the HOT 15mm Fantasy Range once more.  The Savage Lizardmen are here to stay with Warriors, Spear and Polearms.  In coming months they will continue to expand on this core. Go HERE or read on for more information.

Our mega event March to War 2021 is on at Alternative Armies.  Until 3rd May automatically 20% off all orders at checkout, 24 new releases, free and cheaper shipping rates and more.  Read about this in full on our BLOG.  Plus all this month you automatically get a free 40mm tall Troll in your package.

HOT127 Savage Lizardmen Spears – A pack of ten or a sampler of all four poses.

HOT130 Savage Lizardmen Warriors – A pack of ten or a sampler of all four poses.

HOT134 Savage Lizardmen Polearms – A pack of ten or a sampler of all four poses. 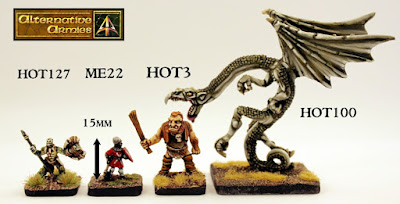 Here is a scale picture of a new Lizardman next to a Medus Human as well as an Ogre and the Ghoul Dragon. These new warriors will suit any game system for battle level or skirmish or even dungeon crawl encounters.  Search by code on the website to find models shown. 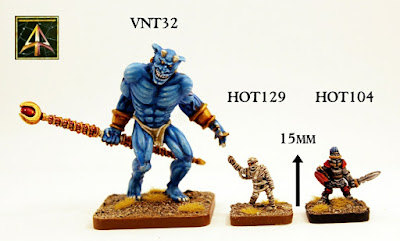 There are more than one hundred and forty packs in the HOT 15mm Fantasy Range covering Dwarves, Orcs, Goblins, Elves, Zombies, Skeletons, Undead Dogmen, Elementals, Dragonmen as well as Humans and many different creatures and monsters such as the mighty Djinn (above).  Have a browse HERE as there will be something you will like we are sure.