welcome to Page Ten of my project diary. If you’re wondering what this is, please check the

We’re on the finish-line, folks. This will be the penultimate installment of the project diary, and today, I will talk about finishing the base. This included three main steps:

But before we start, let’s take another look at the project when we left it in Part Nine: 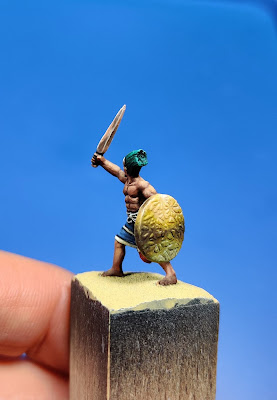 The first thing I did was painting the base. This included three parts: first, to finish the sand, giving it a little “depth”. For that, I simply gave the sand a slight wash with a very diluted brown (VMC Smoke). Once that was dry, I drybrushed the sandy surface with the basecolor (VMC Dark Sand) and, finally, some Ivory to bring out the highlights a little. Second, I treated the parts of the base where I envisioned slightly “deeper” water with a diluted wash of VMC Emerald and, where the deepest part would be, a little VMC Turquoise. This, later, will simulate some depth in the water. Finally, I also painted the cast shadow of the miniature, taking into account the zenithal lighting situation and the idea that the Mediterranean sun is standing high and glaring in the sky. I didn’t worry too much about getting the shadow totally and exactly right as the water, which will flow around the raider’s legs would distort the shadow and lighting a bit.

The next step was all about that deep water-fun! As will all my water-works, I followed my MV jungle brother Josua’s fantabulous 2K Water Tutorial. So, I started constructing the borders into which I would be pouring the resin water, using some cut-up transparent plastic sheet, which I then glued to the plinth.

Once the borders had been put in place, I prepared everything for pouring the 2K resin. As noted, I follow the commandments laid down by Josua for all times in his excellent tutorial. But as described in a previous tutorial of mine, in addition I like to stir the resin while bathing the container in a mug of hot water. This makes the resin “runnier”, i.e., more liquid and like water – it becomes easier to pour and there will be fewer air bubbles. And that’s exactly what I did with this base as well. Once the 2K resin was nicely mixed, I used a single-use plastic pipette and carefully let the liquid run into the area. I used a toothpick to make sure it spread everywhere I wanted and to remove the two or three tiny air bubbles that occured at the edges. And with this, I left the project to rest for about 24 hours.

Once the resin was hardened, I returned to the project and – as always when working with 2K water – was a little anxious about what would await me when I would remove the barriers. Well… Overall, I was happy with the result. BUT: there were two issues that needed work before I could finish the water. First: When I super-glued the barriers onto the plinth, a little bit of glue had snuck up and laid itself on top of the already painted sand area. Once I removed the barriers, the superglue stuck to the barriers, and I removed it along with the barriers, leaving a little hole or tunnel at the bottom of the 2K water.

The second issue was that, despite the “genious” trick of positioning the plinth on a one-cent piece, a little bit of resin had run along the edges and now there was water where none should be: 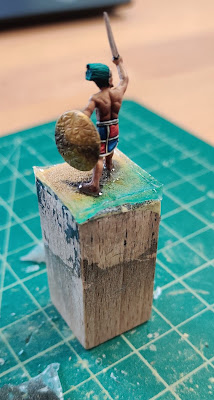 I first addressed the second issue, cutting away the superfluous resin that had run along the edges of the barrier. Along with the resin, I of course removed some of the “sand”, so I had to recreate it with a little bit of Milliput, which was then painted. Then, I took on the first problem – simply by painting the sandy surface below the “deep” water and then adding a little UV-hardening resin into the “tunnel”. When that was cured, I gave everything a nice little sanding to even the surfaces.

Then, it was time to add the waves. For that, I used Vallejo Water Texture, a thick, gooey acrylic gel that is white-opaque when it comes out of the container, but becomes transparent when it cures. With this, I did two rounds of adding waves, trying to recreate the look of surf at the beach, and letting the first layer cure before adding a second one. 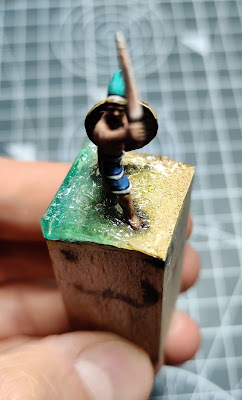 Once the second “wave-layer” was cured, I added a bit more acrylic gel here and there, and added a tiny bit of Vallejo Still Water on the beach, where no waves would be. I did this, first, to give the sand the impression of wetness and, second, to smoothen the transition between “waves” and “sand”. 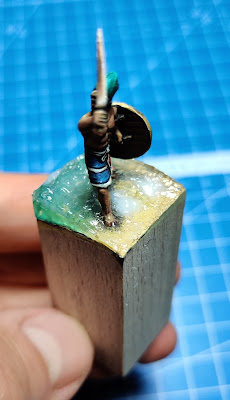 However, when I looked at the scene with a fresh set of eyes before starting to put the whitewater on the waves, I was not really happy with the look and “feel” of the waves. I was not really sure what it was, but when I compared the waves with images of “the real thing”, something was off. So, and as so often with my projects, I decided to take a radical step – and put a sharp scalpel blades to the waves, which allowed me to start from scratch with modeling the waves… 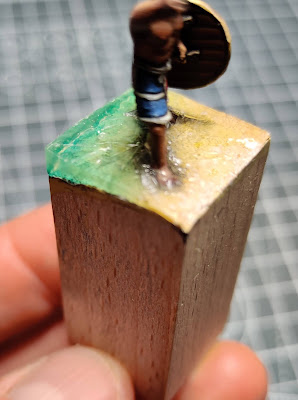 Thankfully, I remembered that I had seen a tutorial on modelling a beach scene some time ago, over on YouTube. This I decided to follow slavishly. So, I started out with carefully making the waves again, in a more realistic fashion. For the whitewater, I mixed the acrylic gel with a tiny bit of acrylic white color and some microballoons, usually used for recreating snow, and carefully added it to the waves. Finally, when all was dried and hardened, I gave the whole surface a slapping of some Still Water effect to restore the shininess. The last bit of work was some light and careful sanding, polishing, and gloss-coating of the sides of the hardened 2K-resin to make it nice and smooth.

Looking back, to be honest, I was not super-satisfied with the result of my second water experiment, as I find the waves a bit too shallow and I dit not manage to recreate those little foamy crests. I also do not find the water lapping up the raider’s hind-legs particularly convincing. But I decided to call it a day and leave it as is.

For the absolute final step, I checked the figure for some last-minute corrections. The only thing that I decided to do was to repair two little specks at the mini’s sword-hand where I accidentally removed some paint during the sanding, and on the lower side of the shield, which had mistakenly been hit with some water texture. I also made my peace with the sword, deciding to leave it as it was. Then I painted the plinth black. I really like the effect of a deep-black painted plinth, which, in my eyes, serves as a nice and strongly contrasted “frame” to the scene, driving home the idea that the mini-and-base combination is a small sliver “taken out of some larger environment”. I painted two layers, using cheap acrylic black color, and in between I carefully sanded the surface with fine-grit sandpaper. This makes the paint really nice and smooth. As a last thing, I added my signature at the base of the plinth – for me, this always signals a project’s completion. 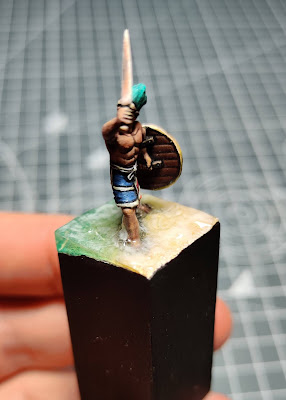 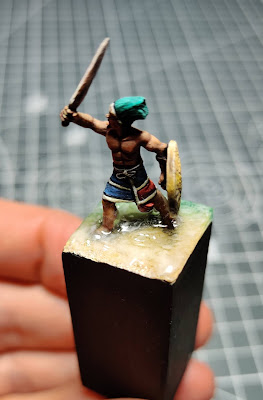 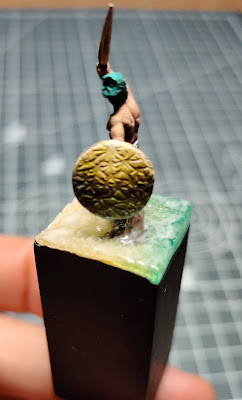 And that’s that. For the final presentation, I will put a small, plaque on the plinth, which I’ll have custom-made for this project by my friend Conny over at Fredericus Rex! I will post some final, good pictures at the blog once I have made them. In the meantime, and as always, feel invited to drop me a line in the comments? I hope to see you soon in the Epilogue for a quick debriefing!!

MVTV: And even more Video Updates! 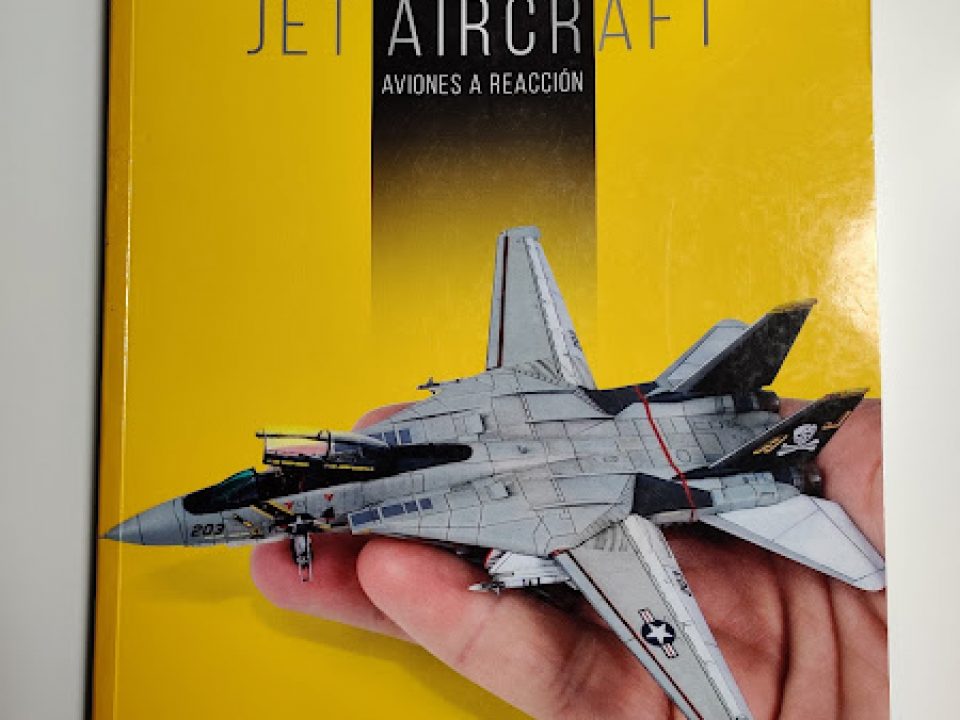 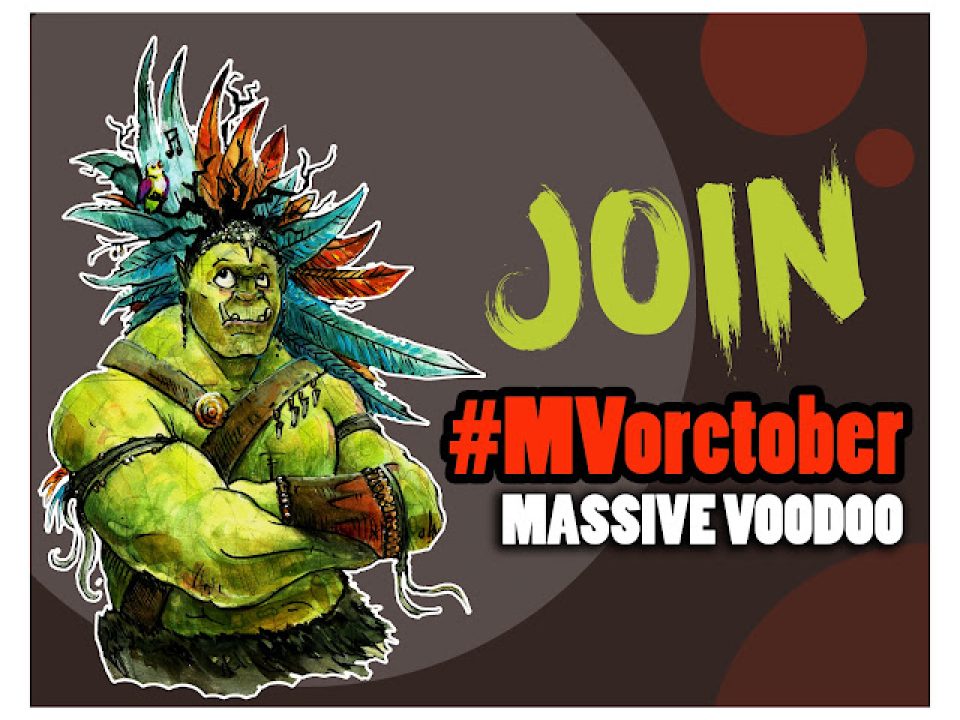 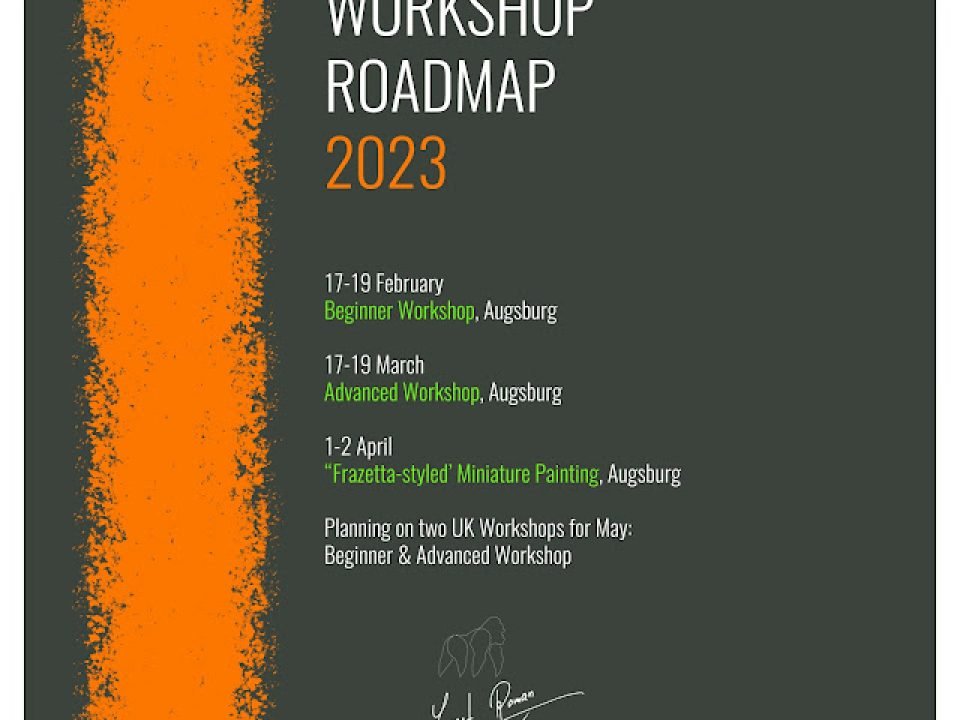 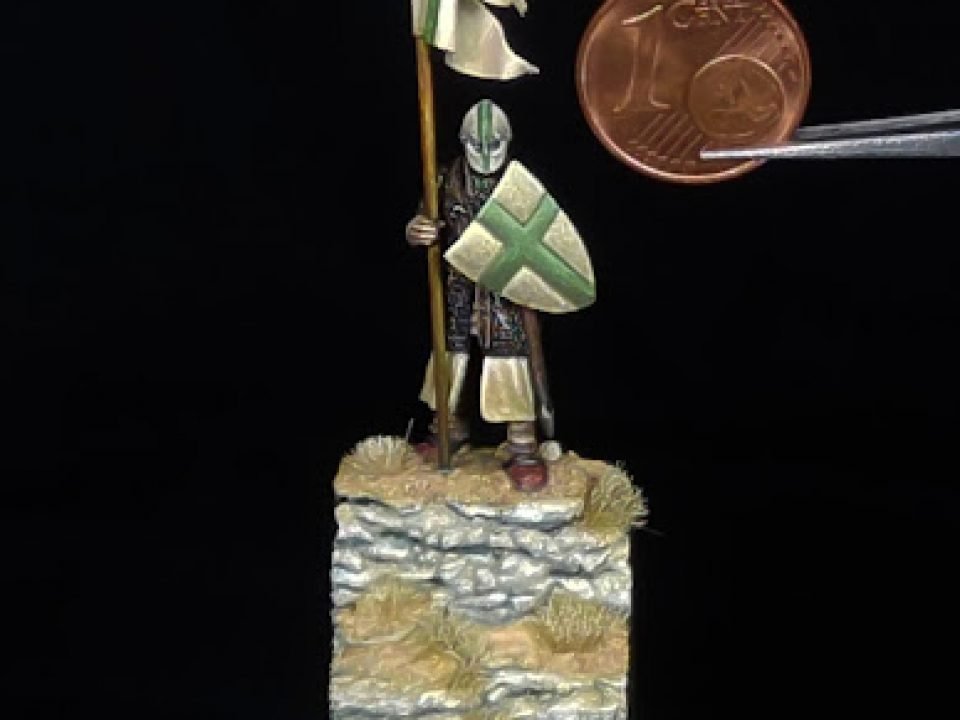