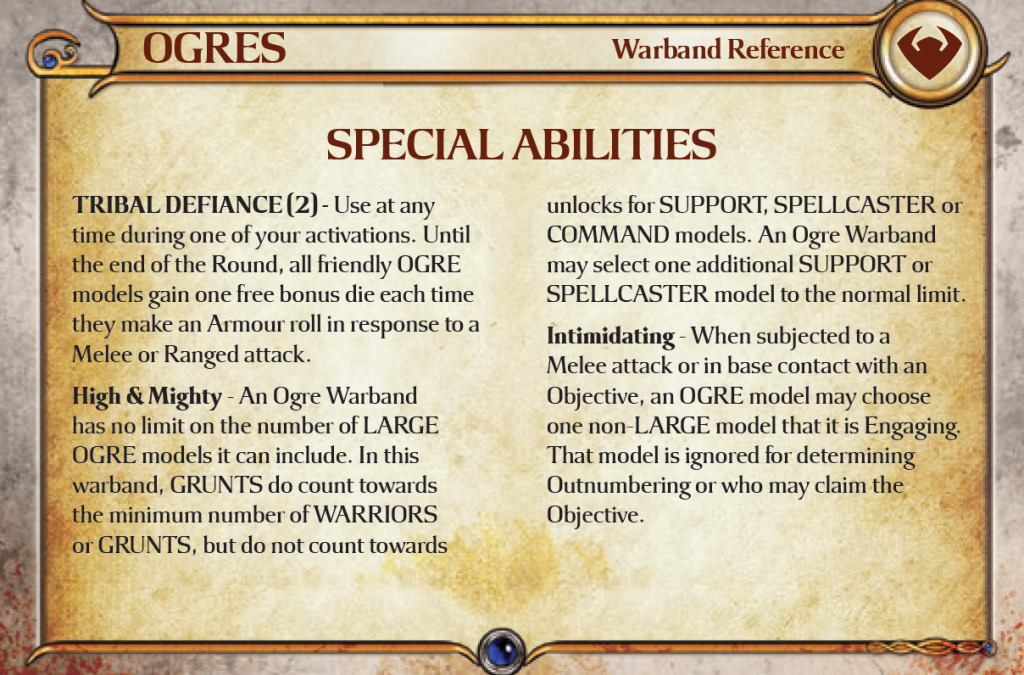 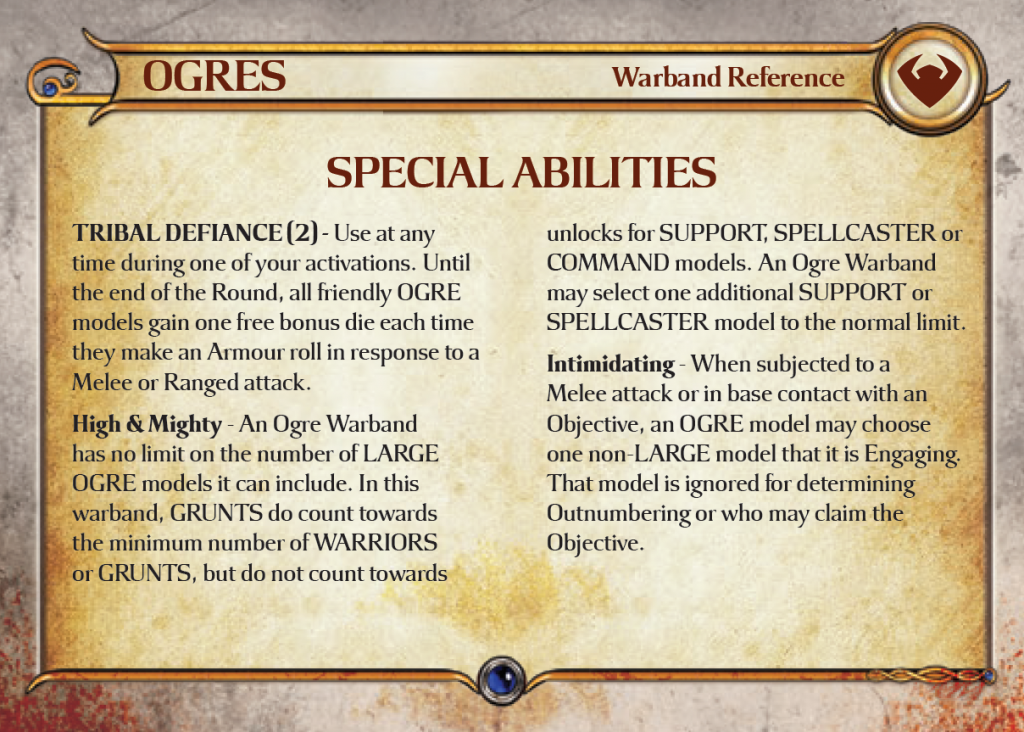 Later this month we’ll be releasing our – counts on fingers – 10th full faction for Vanguard. The neutral ogres are one of the more interesting armies in Pannithor because they’ll basically fight for anyone… if they’ve got the cash.

The idea of small warbands of mercenary ogres makes a lot of sense. After all, it’s likely small groups of ogres would be happy to carry out work for hire, no matter the task. As a result, we really wanted to give them the full Vanguard treatment!

If you’ve been following Vanguard for a long-time (of course you have, it’s the best fantasy skirmish game ever) then you’ll know that when we do a full warband release it’s a chance to freshen up the faction. First, we take a long hard look at the existing faction list (in the hardback rulebook and the downloadable warbands). Then we look at reports from players to see what the warband is missing or where it’s under performing. Following that we get to work on a brand-new list.

The big takeaways from our research into the ogre warband was:

With that in mind, we went back to the drawing board. The result is a more balanced ogre list that feels like they’re a group of powerful mercenaries for hire, with the goblins are support – rather than a key unit.

Let’s start with one of the most important changes – the warband special abilities. You’ll notice that Brutal Roar is now completely gone and has been replaced by Tribal Defiance and Intimidating.

Tribal Defiance – we really wanted to make sure the ogres felt like a tough faction. After all, have you seen the size of them? This gives them the edge when it comes to making important armour checks… and should keep them alive a bit longer.

Intimidating – this is perhaps one of the most important changes for the ogres. As mentioned, there were numerous comments from playtesters that their size was actually acting against them because they were easily outnumbered. Now an ogre can ignore one enemy model, so it’s going to much harder to swarm all over them!

No great changes to the spells, apart from the fact that Battle Fury is no longer an auto hit. Hey, these changes aren’t always smiles and sunshine :p

Before we move onto the ogres, it’s worth talking about a big change to goblins. We really wanted them to drop into more of a support role for the ogres. Now with the ‘Here you go Boss’ rule, they’re there to boost the ogres. They’ve become a little cheaper (6pts compared to 7pts) and their stats have taken a slight hit, but they’ll now provide a more useful role to support the big folks!

Moving onto the core ogre troops now and there was a definite feeling that the original Ogre Warrior was a bit too expensive, which made it hard to squeeze them into your warband. As a result the 23pts Ogre Warrior has been replaced by two separate entries: the Brawler and Cleaver.

You’ve now got two options, rather than one to bulk out the core of your warband. Talking of making it easier to choose troops, one of the big issues we found with the ogres was their lack of shooting options. Although they had the Boomer, it was a support model and came in at a whopping 40pts. So, say hello to the Shooter…

Although the Shooter doesn’t pack quite the same punch as the Boomer, the fact it’s a Warrior and is 15pts cheaper means the ogres finally have a decent, cheapish shooting option to accompany the melee units.

However, the introduction of the Shooter isn’t the only big shake-up to the ranged options. The Boomer has been changed to a Warrior and had its points dropped from 40 to 33. Yes, it’s taken a little hit on stats, but it’ll be much easier to include in your warband now.

Again this just makes it slightly easier to build a full ogre warband without the need for pesky goblins as core troops. In fact there are quite a few units that have dropped in cost, the Warlock has dropped from 36 to 31 points, while the Hunter is now 21, compared to 27.

One of the few units to increase in price is the Brave (now a Berserker Brave). However, they have changed to a Warrior, rather than a Grunt – which should help them survive a bit longer. Plus, they’ve had a bit of a boost on their stats/abilities too.

As you can see, the ogres have had one of the biggest shake-ups so far for an existing faction. In tomorrow’s blog we’ll have a closer look at some of the new units.

Remember, you can pre-order the new ogre warband from your FLGS or direct from the Mantic website.

The post Preview of the Ogre Warband appeared first on Mantic Games.