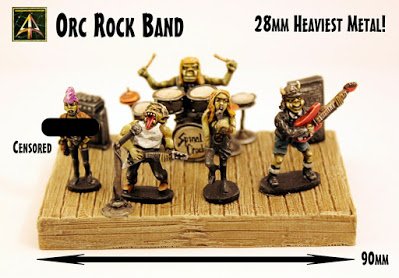 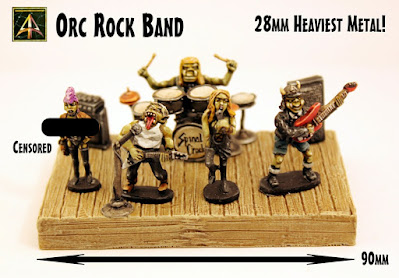 “The smell of smoke on the rancid air. The hum of power and the flash of lightening. Screams and chants. Be this battle and the sound of slaughter? No its Spinal Crack and their latest album at full volume. An Orc Rock band from the era before music shattered and collapsed into floppy hair and corporate sound bites. These hard rockers will give you bites for real!”

Not everything a wargamer wants has to do with putting troops onto the field. Sometimes something a little different, a bit special makes an appeal to a wargamers nature and says ‘I speak to your soul’ and the Orc Rock Band is just such a thing. Originally released by Tabletop Games in the early 1980’s and now restored to glory with one alteration.  The original stage for the band was in metal and we have replaced it with a resin stage of the same design but twice the size! 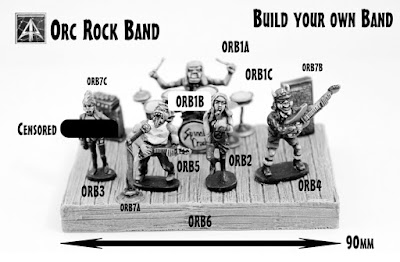 You can have a complete band with stage or on a new page for this code you can select any part of the band in any amount meaning total customisation of your rockers.  The mono image shows all the pieces and use the drop down box on the ‘Build your Band’ page to choose what you want.  Here are the pieces: