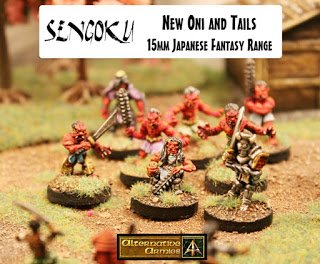 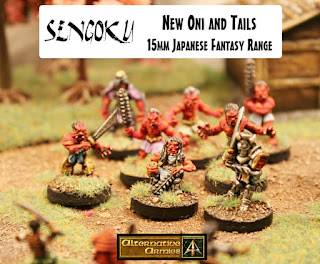 New miniatures sculpted by John Bell in the biggest 15mm selection of Japanese myth inspired fantasy in the world.  Over one hundred and fifty poses in the range and growing.  A pack and single choices as always with Sengoku.  Go

The Oni are fearsome creatures who stand twice the height of a man and will devour any who stand in their way.  It is a true test of a Samurai’s skill to defeat such a foe. 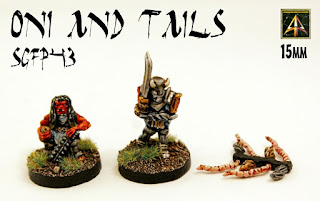 SGFP Oni and Tails. This pack contains six mixed miniatures of three types.  A sitting Oni suitable as a commander or other personality.  A fully armoured Oni with two handed long sword.  A sprue of eight different tails for adding to your Tanuki and Nezumi miniatures.  The mix is typically two of each pose and sprue.  Taken from codes SGF151,152 and SGF153.  This pack offers a saving off single purchase.  Go HERE.

There are other Oni in the range which you can find in packs SGFP29 and SGFP03 in which you will be told single codes on those pages.

While you can use the Sengoku range of miniatures for any game in this scale there is an excellent game system at Alternative Armies which uses these miniatures.  Two books written by Steve Danes (he of Furioso and Doom Squad). In Print or a Digital Download at a twenty percent less.  See them HERE. 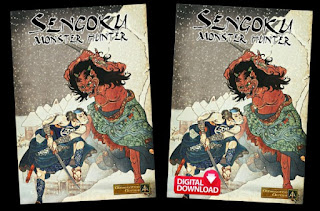 Sengoku Monster Hunter.  A game for one to four players set in medieval Japan where monsters and creatures of myth roam the jagged crags and hidden valleys of the Sacred Mountain. It is from the Sengoku setting and has merciless hunters who track down the monsters and slaughter them at every opportunity. Who you Play. Hunters are the players characters in the game. Each hunter has a profile of attributes, skills and special abilities that players can improve if their hunters are successful.

Sengoku Rampage. Rampage is the second book in the Sengoku Monster Hunter series; the game set in a mythical Japanese past of fierce monsters and even fiercer monster hunters. This is a supplement to the original rules and it provides much more material for playing Sengoku Monster Hunter. It’s features are: More Monsters More Encounters.  New Hunters and Clans. New Hunting Grounds including the Underground. Monster Rampage which is a larger version of the game where the Hunters become the hunted. 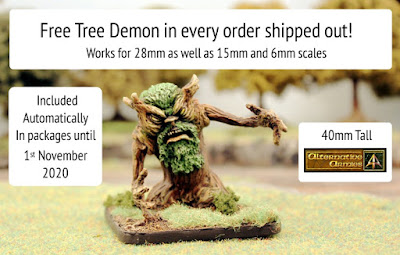 All this month every order shipped out automatically gets a VNT5 Tree Demon included for free!  Great for fantasy and other uses in many scales.  You might also try it in Sengoku Monster Hunter too.  See HERE for details.