Get Back Gaming: Armada 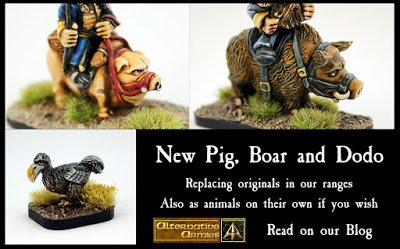 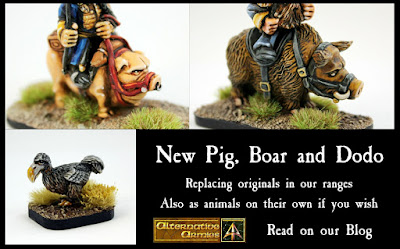 Alternative Armies has replaced three riding animals in the Flintloque range with updated versions.  These new versions will, from now, replace the originals in all codes which make use of the Pummilig Pig, the riding Boar and the Dodo.  In the case of the Pig and Dodo these are newly sculpted purpose designed for resin with saddles which will fit any of the existing riders.  The Dodo, by request, is now in a running pose rather than standing.  Here follows a list of the packs affected and you can also purchase these animals on their own too if you desire.  Original Dodo by Elton Waters and new Pig and Boar by Sam Croes.

As we work towards the Bier Wars (see the article from April on our BLOG) our Dwarves needed snazzy new mounts. 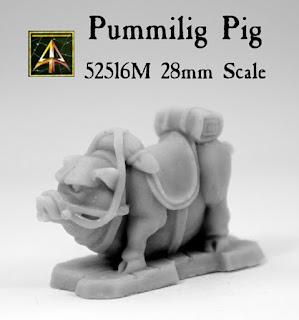 52516M Pummilig Pig: The mighty Pummilig Pig is favoured by the Dwarves of Krautia and also some Dwarves in the tiny states of Finklestein such as the Von Rotte Legion.  It can also be eaten on campaign..well it might also just eat its rider. 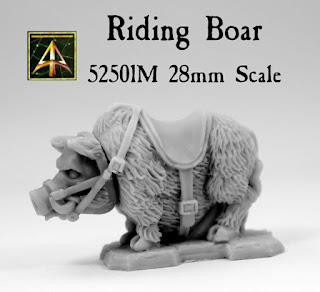 52501M Riding Boar: Big and bristling this mount is used by the Dwarves of Finklestein as well as Krautia plus some of the Dogmen states.  The model is two piece with a separate head while requires assembly. 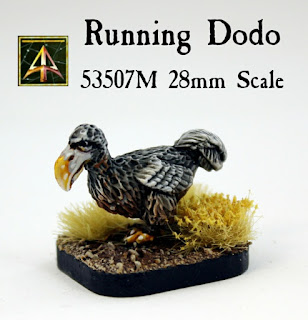 53507M Running Dodo: The Goblins of Al-Garvey and its Darke Age lands ride upon these flightless birds as it suits the rugged terrain of their nation.  A metal miniature which can also be used as battlefield interest and as an animal in its own right.

All of these are in each nation’s army page as well as our Battlefield Bits and Others Range alongside lots of other animals, scenics and interesting things.

Here is a list of all the codes which from now contain these new versions of their riding animals:

In our next update we will show you all of the re-mastered and re-released classic Legion de Nain blister pack codes from the 1990’s including a new foot officer as requested by players.  We will follow this up with the return of the updated Finklestein Dwarf Artillery Crew plus a Dwarf Messenger.  All of this will mean in June we can proceed with brand new Legion releases with all the troops lined up behind them ready!