Fun For The Masses! 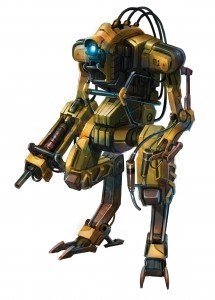 Hey Samarians! With Immortals 2017 and the 2017 UK National Championships behind us, not to mention a brand new Immortal boxed set heading to the webstore VERY soon… we at Dark Age think it is a great time to show off a few things that we have been sitting on for a little while – new Units! While these cards are solely in the digital format at this time (similar to the new Unit Cards we released for the Forsaken and Bounty Hunters), and so many excellent fan-run events being announced on the fan Facebook pages, we know that you guys will be excited to start using these Units on your battles as soon as possible!

Today we get a few new Units for two Factions – the C.O.R.E. and the Dragyri!

For the C.O.R.E., we get three new and fabulous mechanoid monsters that will bring new ways of dealing with the enemy… and friendly malfunctions!

Repair Menial – When L1ghtbr1nger discovered that the C.O.R.E.’s biggest threat to their victories were battlefield breakdowns and malfunctions, it went to work creating dedicated Menial Bots that exist only to continually maintain and look after the technology of a C.O.R.E. warband. They can turn on offensive protocols if necessary, but their primary role is to try and mitigate the failures of their brethren.

Welder Drones – While dealing with the Broodfolk mutant Irinya, Project: Aren noticed how instrumental the slithering Pud creatures were to keeping larger creatures alive and fighting. This caused the resurrected scientist to do deeper research and eventually invent a similar mechanoid beast for the C.O.R.E. to use. The Welder Drones’ segmented polymer shell is filled with spare lubricants, parts, and disposable epoxies used to fix a broken hydraulic, clear a jammed line, or even purge a blocked power conduit in seconds – so long as it is close enough to do so!

TyrRex-3 – The C.O.R.E. AI has always been curious about the ancient Terran past of its Creators, digging through zetaflops of data to find interesting notes of worth. After designing the fast, pack hunting RaPtr-7s, the AI discovered illustrations of a similar reptilian beast from Terran pre-history. Mixing the imagery it discovered with some related mythology of atomic energy-breathing beasts it found in much later media files, the resulting “alpha mechanoid” sprang from the foundries. Capable of stomping across a battlefield to bring its own style of destruction, the TyrRex-3 was actually designed to lead packs of the smaller RaPtr-7s to give them a powerhouse anchor and – using the atomic venting from its experimental void furnace – some real fire support as well!

Void Battery – This new C.O.R.E. Upgrade was invented specifically to use a xenosathic-fueled furnace to significantly boost the internal power supplies of a C.O.R.E., albeit to dangerous levels. If this energy is not spent and the safety shell is breached, the battery will surely detonate in a spectacular miniature atomic blast!

The new Dragyri Units fall into two categories – the next wave of the mighty Earth Caste that has awoken, and an ancient Soul Warden technique that has emerged that all Castes can call upon.

Mattock Slaves – More muscled than normal Slaves, the pickax-swinging Mattock Slaves are the excavation force that is slowly revealing the long buried and hibernating Earth Caste. These adept diggers can, with the help of psychogenicaly-charged tools, move through the ground with surprising speed. Woe be to an enemy that finds themselves lying on the ground for a big overhead swing from one of these musclebound Dragyri servants!

Greater Avalanche Elemental – When the Soul Wardens of Earth gather the most psychogenically charged crystals in their rocky shrines, they can fuse them together with the steady patience of Earth Caste traditions and form them into an Avalanche Elemental. Tons of crystal, soil, stone, and sand all churning together to form a massive hulk, Avalanche Elementals are like walking mountains. Little can withstand their heavy pseudo-fists for more than a few crushing impacts, and even those that flee from their bulk find themselves quickly outpaced, because once the earthen behemoth gets its body moving with enough momentum… it moves with an unstoppable force!

Spirit Lord of Earth – The teachers of neutrality and balance, the Spirit Lords of Earth have lived a long time and matured beyond their aggressive younger decades. They find a certain focal energy in the quiet of the still world, wielding powerful Earth Foci with great prowess. Their soothing presence and calming words can be all the difference between an ally giving in to fear or anger, reaching out with their minds to lay a blanket of ease on their allies – as long as they take a moment to accept such teachings, of course. Do not mistake the calm of the Spirit Lord as weakness or pacifism however, as their crystal-cored quarterstaffs are perfect for bringing a foe to its knees in a blur of practiced strikes.

San’triahn, Arbiter of Purpose – One of the oldest Dragyri currently alive, San’triahn is a mountain of Dragyri flesh that has been hardened by centuries of Earth Foci and soaking up the xenosathc energies of the sarcophagus he was entombed within. He is a bulwark of tradition and neutrality, looking at the chaos of his people as a poison that will surely kill them all. He despises the Shadow Caste and everything they stand for, but understands their part in the cycles of life. The dishonors of the Fire Caste will eventually come back to haunt them, so this Arbiter believes, and bowing his head to the current Grand Arbiter is more of a courtesy than anything else. Forgoing weaponry altogether, San’triahn is a terribly formidable opponent in combat. Adding subtle energies from his Foci into his stony bulk, he is the object unmovable when he wishes, sending attackers flying away from him with a simple turn of his huge, calloused hands. Those same hands can move blindingly fast, striking a foe dozens of times with enough force to turn gravel to sand. Slow to anger, but impossible to deter from his goals, San’triahn has awakened… and nothing will be the same again.

The new Soul Warden ONLY psychogenic power… Summon Aether Elemental – The ancient stories tell of Dragyri heroes fading away into the light of the aether, returning once more when beckoned by the most skilled of Soul Wardens to fight the enemies of the Grand Arbiter. With Yovanka’s ascension to the role, it seems these old spirits of Dragyri energies gone by are bubbling to the surface once more, and the Soul Wardens have been keen on harnessing them for their own purposes. Any Soul Warden can choose this power as one of their Psychogenic Cards, following the instructions on the power to try and summon forth these heroes long gone by.

Aether Wisps – The energic echoes of Dragyri Slaves that gave up their lives for their masters, Aether Wisps are smaller apparitions of wraithlike energy that crackle and lash out at the foes of their Warden. They rarely last long, whether dispersed by the attacks of enemies or simply fading away due to the difficulty of existing as a physical thing, but a small group of them can accomplish a great deal in those precious moments.

Aether Lord – A phantom made from the heroic warrior deeds of long forgotten Dragyri Trueborn heroes, an Aether Lord is a towering elemental that shines like the arc of a lighting strike wrapped in the image of armors that haven’t been worn in centuries. An Aether Lord’s existence is tied to simply continuing its lost goals in combat, reaching out with pure energy to sear the flesh of foes off their bones, or hurling blasts of themselves into nearby enemy crowds. While not truly sentient in any way, Aether Lords have an unsettling voice that somehow picks up on the thoughts of their foes, often screeching out whatever they are thinking at the moment – only adding to their frightful reputation on the battlefield!

There you have it, a handful of new toys for people to start proxying and preparing for! More to come, but for now… go play some games with these beasts and tell us what you think!