Orconomics 2nd Edition campaign on Kickstarter ends with over 1,000 backers

Masters of the Night: Ishtvan, by Gareth Hanrahan 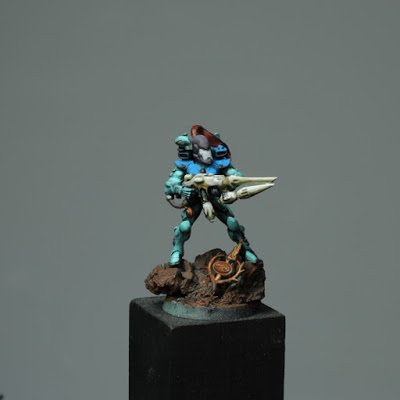 inspired by the call of Gunner with Flamer

The finish line for the 100p is near: As a bonus, I’m also adding some WiP impressions of a gaming board, I’m building. The idea is a world, destroyed during a conflict of Aeldari and the Imperial Guard. The conflict is long over and the remains of the gigantic warmachines are slowly disappearing in the red sand. As the Aeldari are returning after a long time, to recover the soulstones of the fallen soldiers, they discover that the planet is not as lifeless as expected. Some smugglers and criminals seem to have chosen this world as a hiding spot and have setup their camp amidst the ruins. 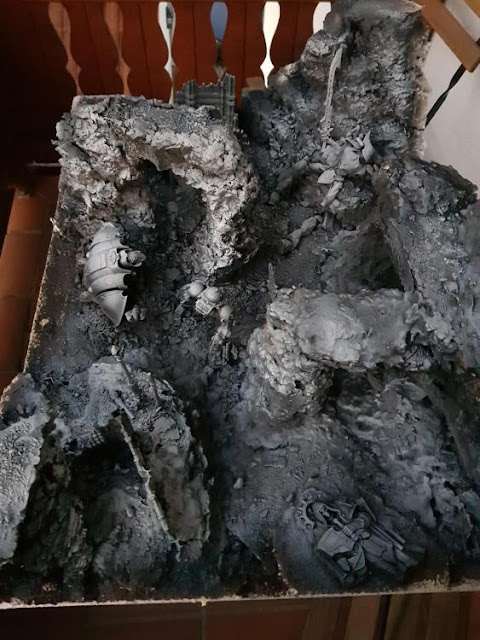 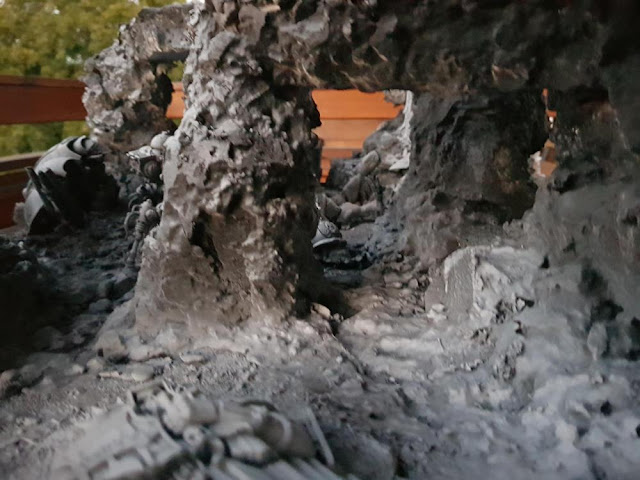 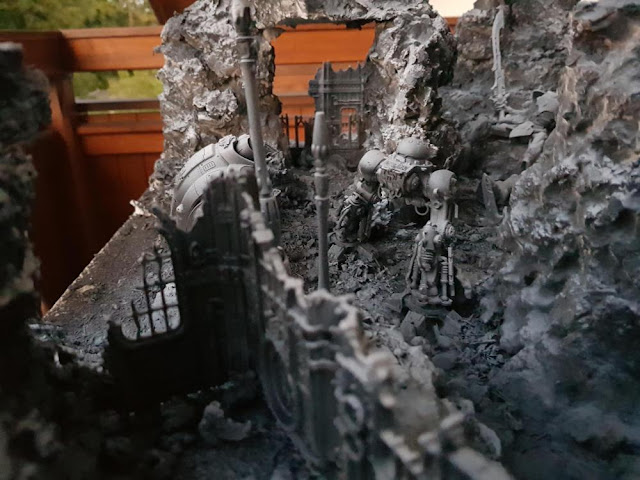 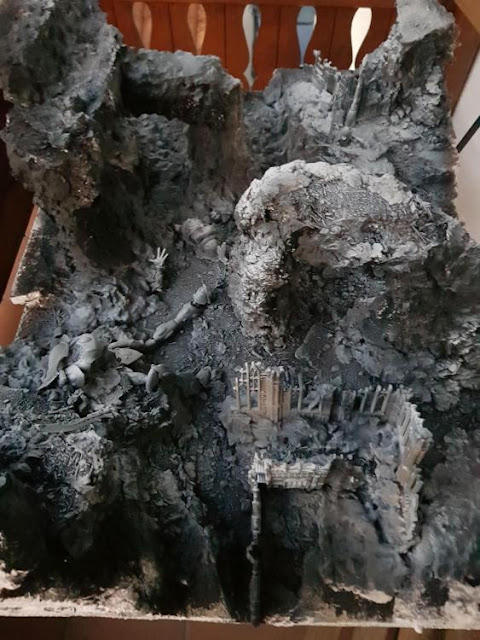 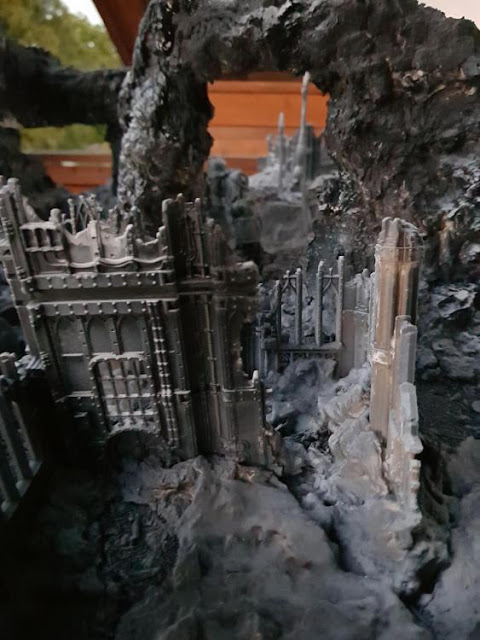 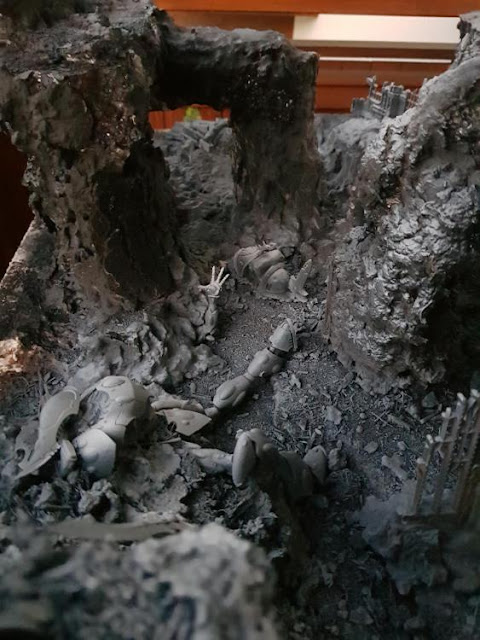 This weeks update is all in favour of my space wolve scout. My list had one in it and I knew this was an important milestone in my killteam. I was planing to build my own scout from the start on as I really dislike the current scout figures. As I know myself to well I tried to break the building down to not get distracted to much. I finally was able to finish this quite extencive build containing various games workshops bitz and some sculpting. 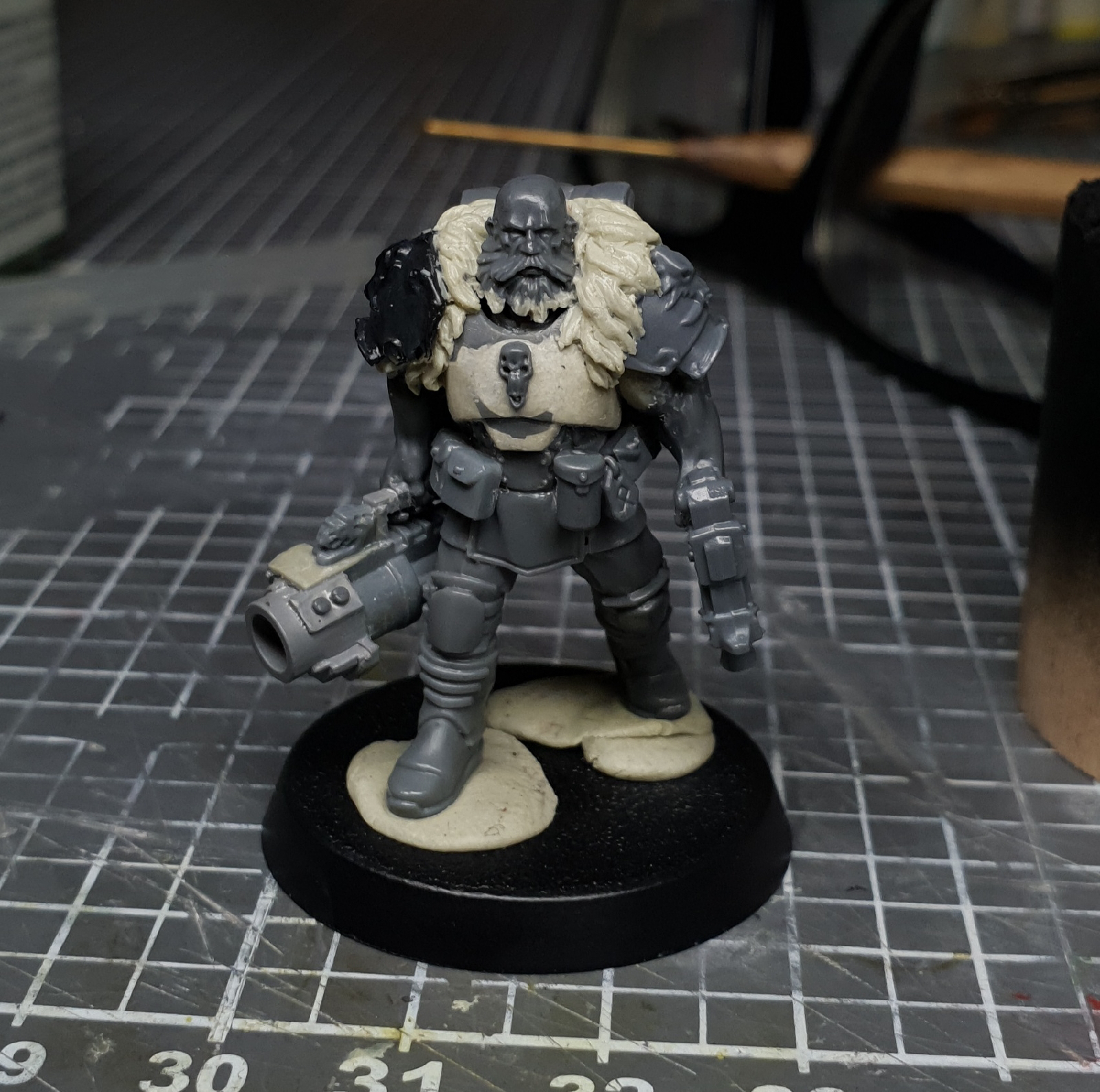 I always start the painting of my killteam in the same way, airbrushing blue greyish tones over a dark base where I masked certain areas with liquid maskol to creat scratches. 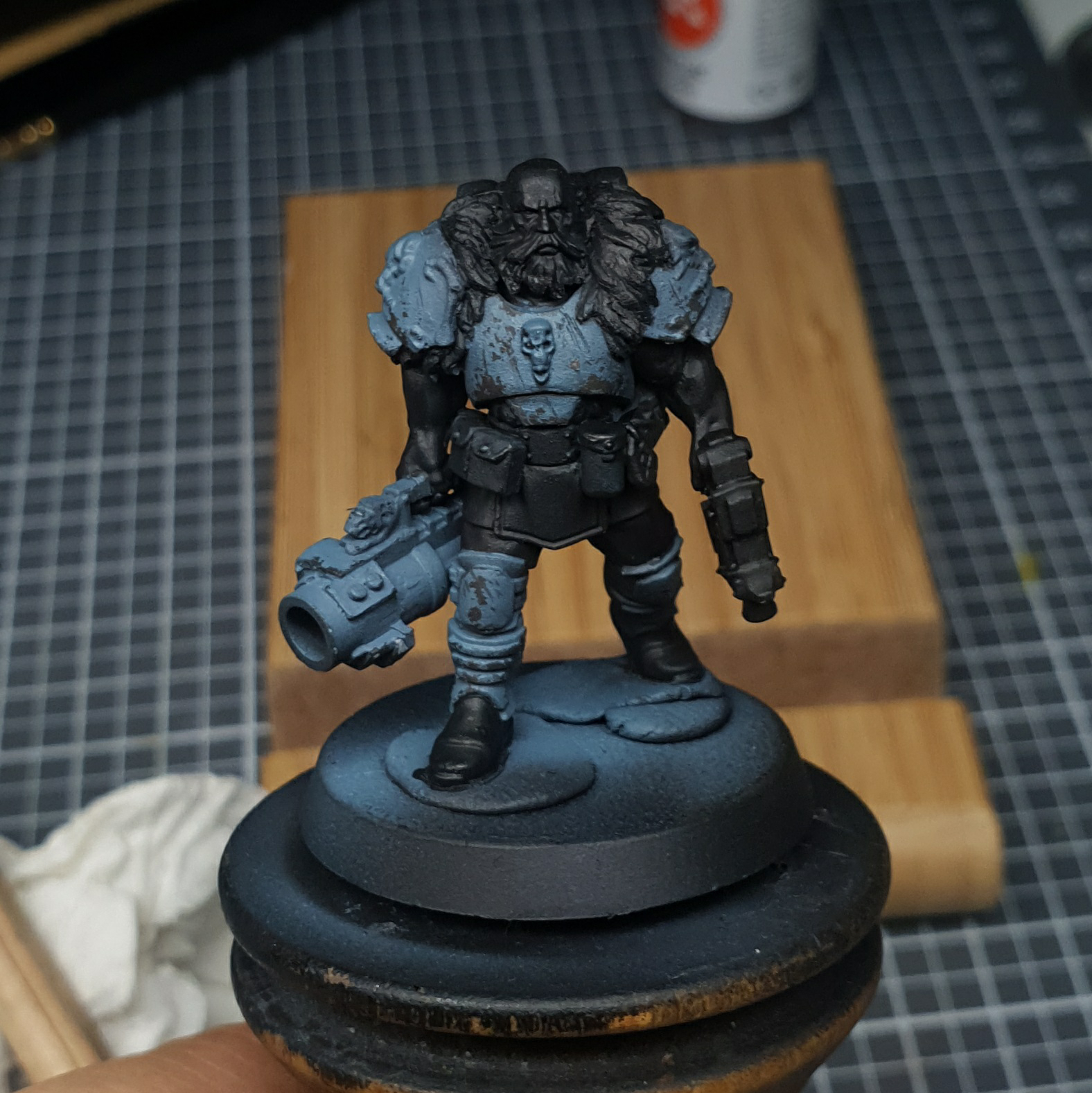 After airbrushing I put the basecolours down to get an idea how the final figure could look. All pretty desaturated and cold. 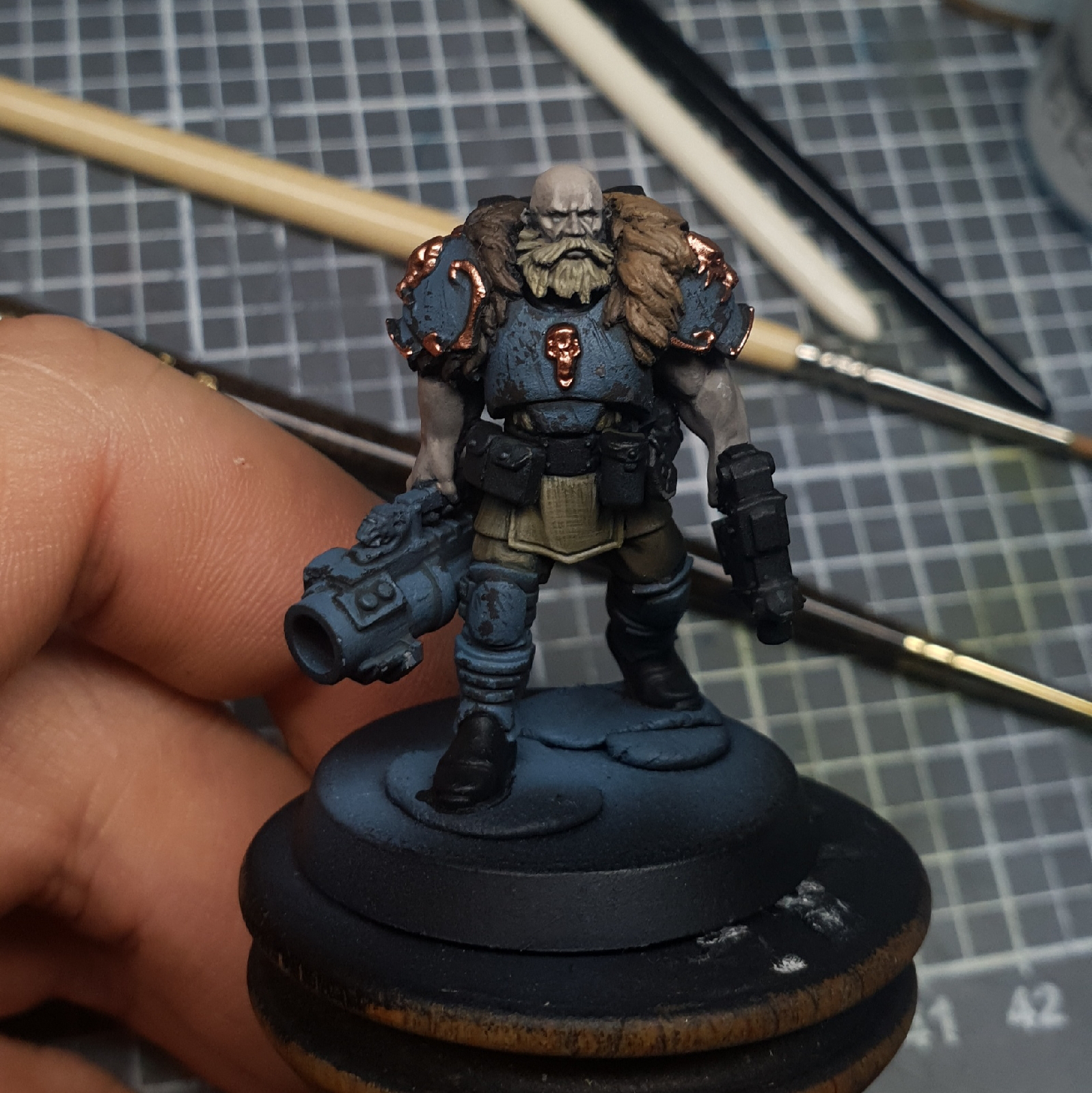 More contrast and saturation. Mainly concentrating on the head shoulder area to lead the focus to the interesting areas. More small details here and there. 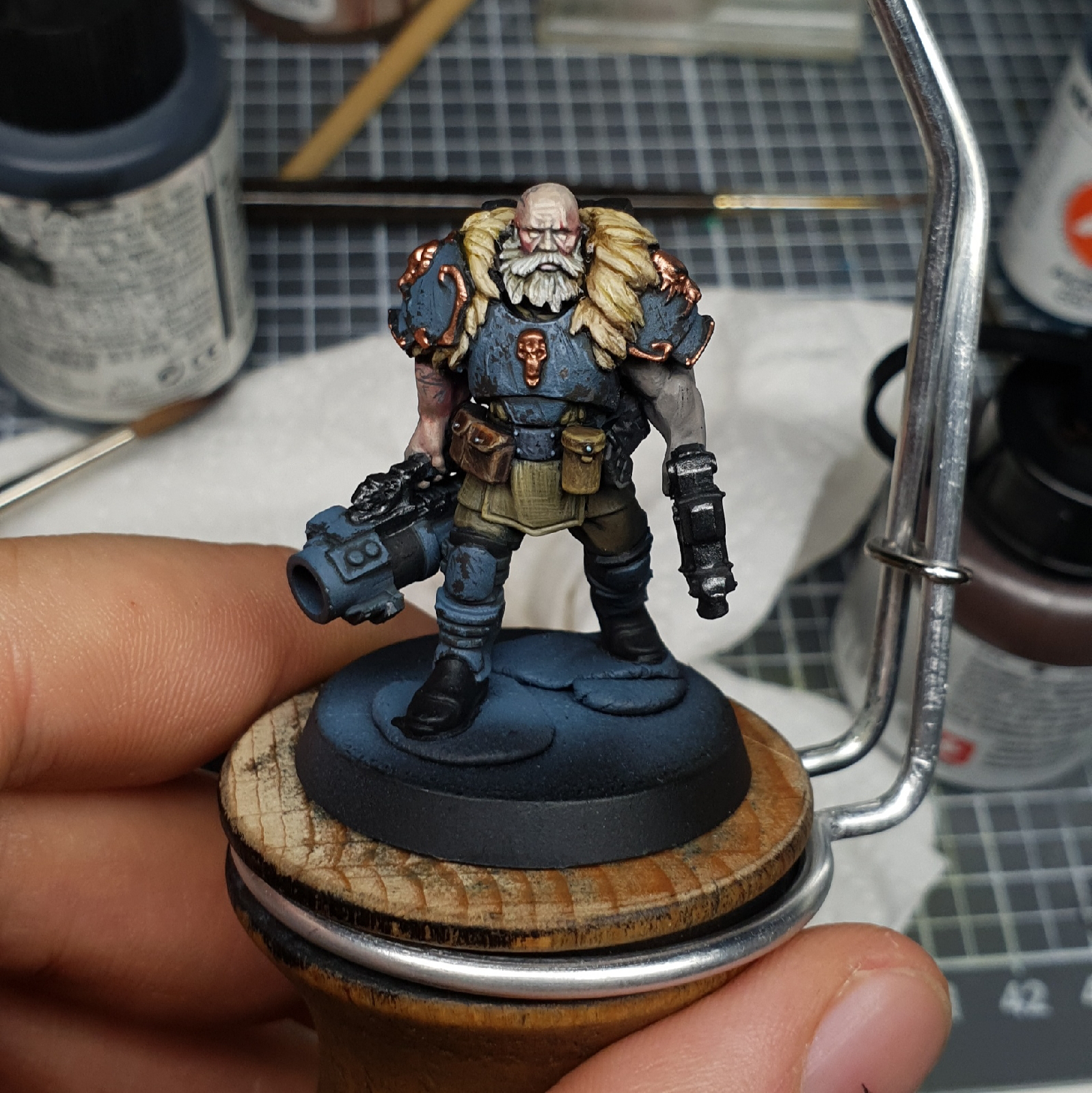 Finally basing time and finishing touches. Decided to repaint the right shoulder to a red as I felt the scout would look more like he would be part of the unit with it. 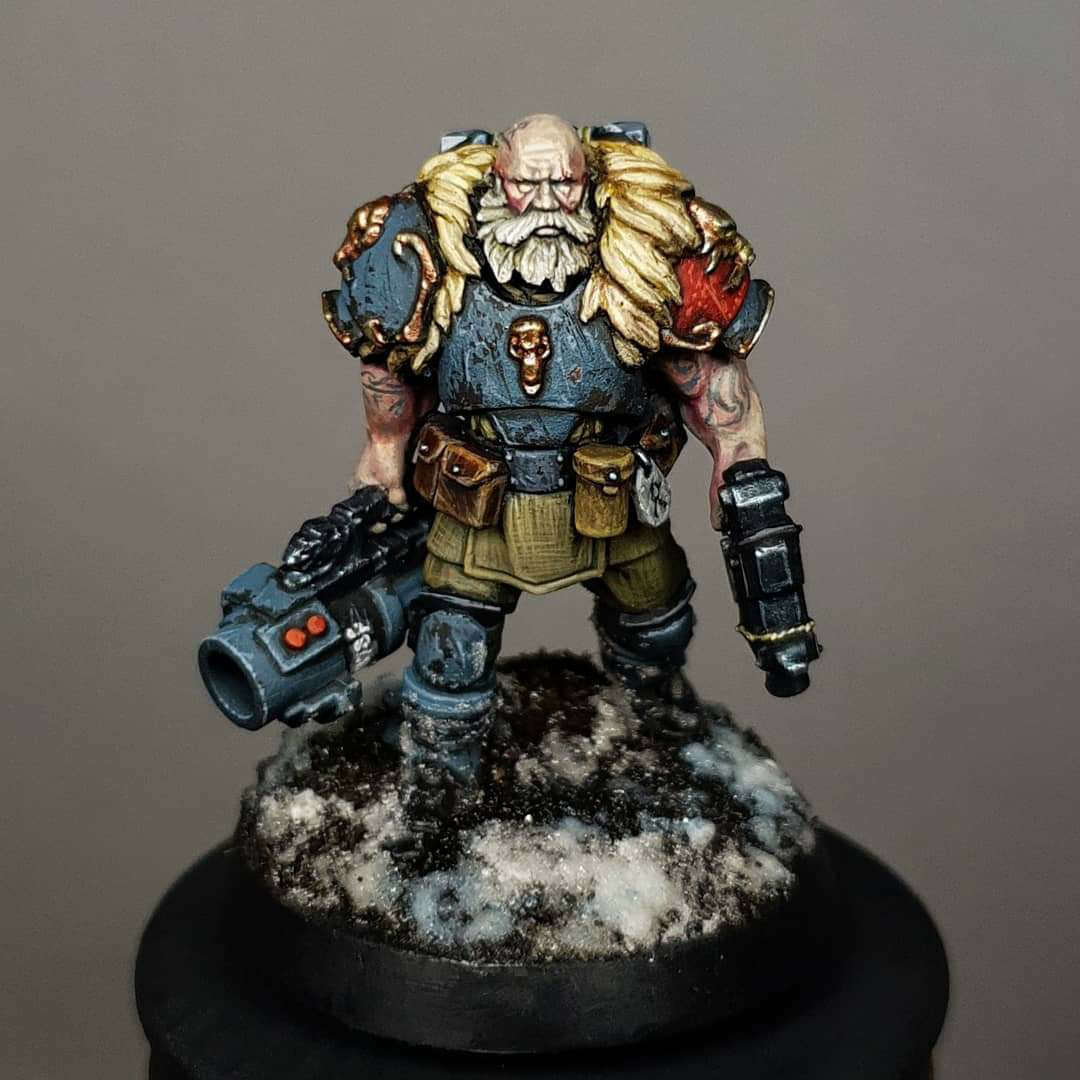 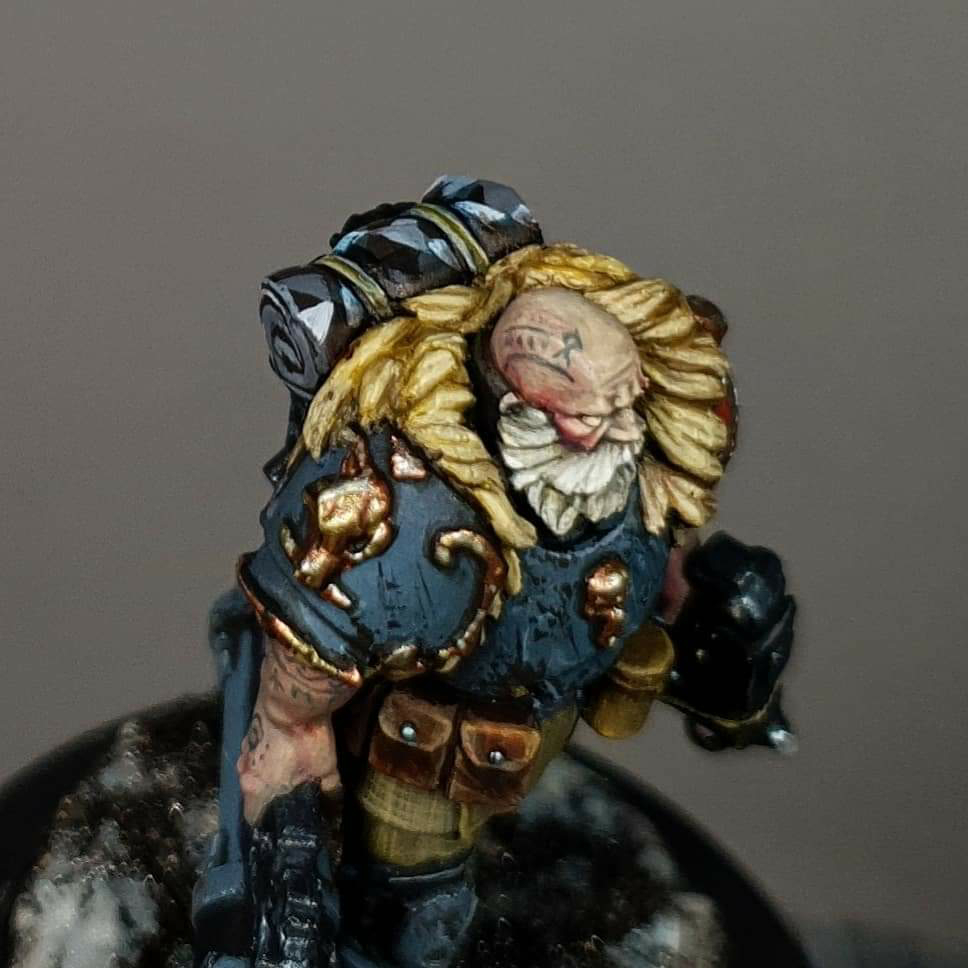 Now only 2 figures left to do. I am probably going for another “regular marine” next t have the seargeant as the last figure to work on.

Well, for the moment my gang is completed with 100 points. At least the Dark Angels …really a proud moment, for me this feels like an army completed 😀 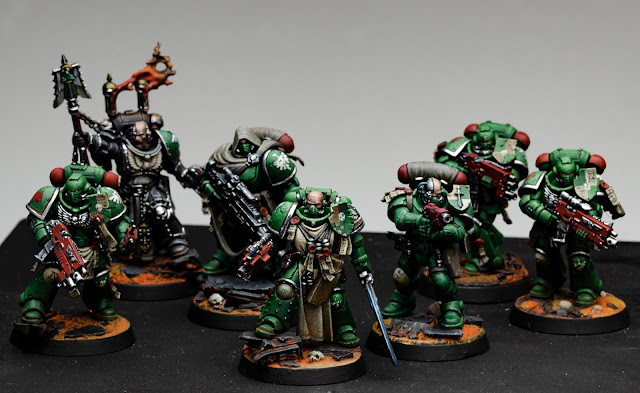 I am continuing to build new members for the Team to bring them up to twenty miniatures for campaigning tabletop … here are the next ones in line: 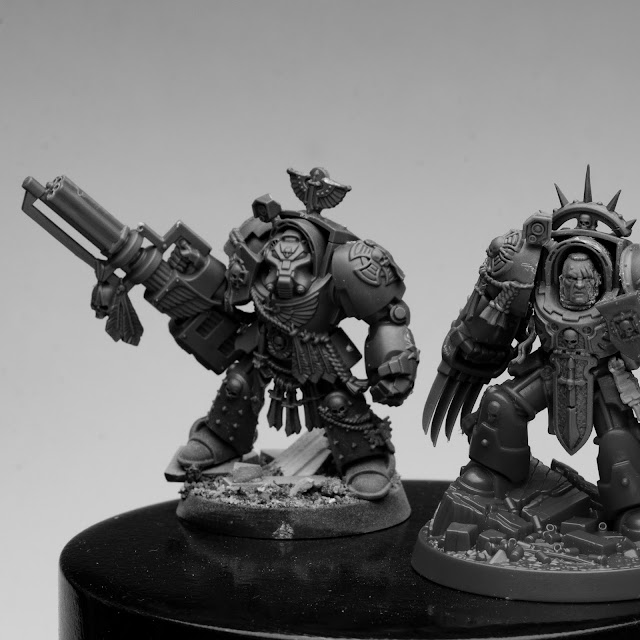 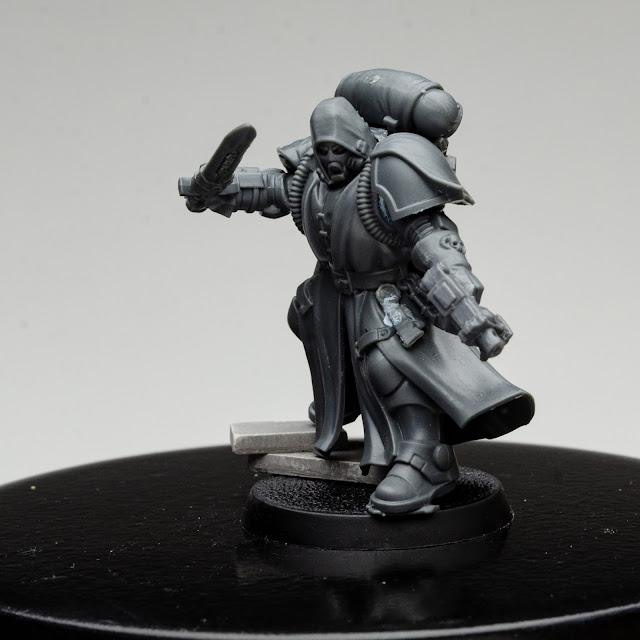 One Company Veteran for hammer time! 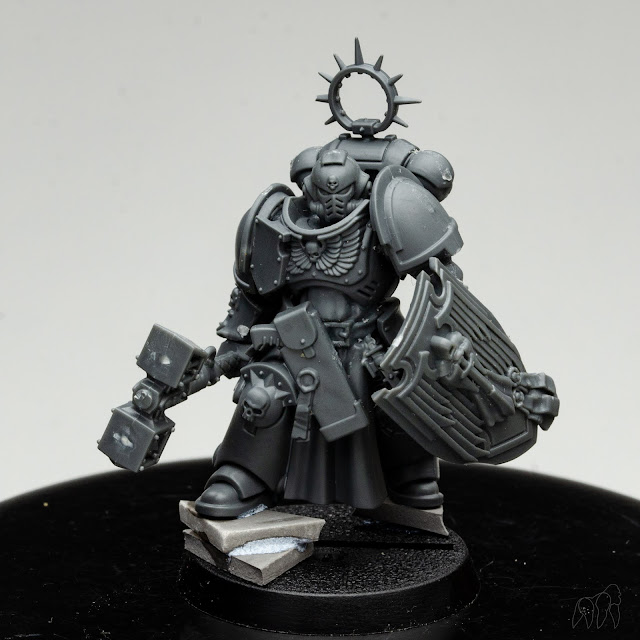 And another company veteran for the hot stuff! 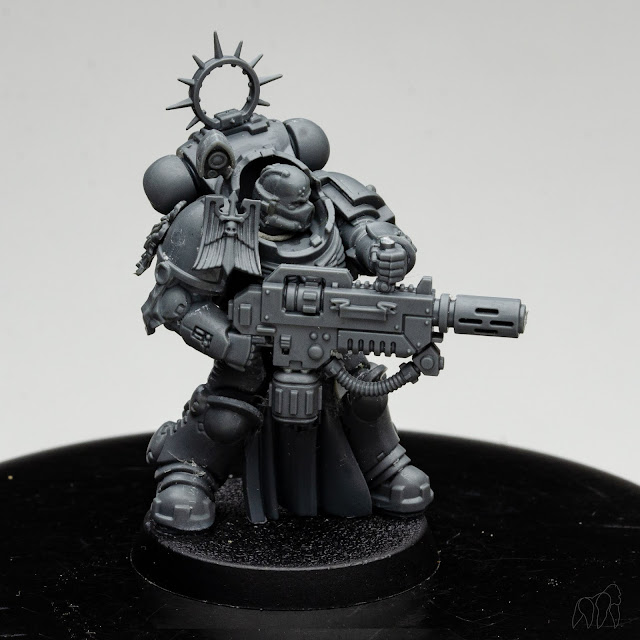 Besides the Dark Angels I am really enjoying to create unique, grimdark models that fit to my Inquisitor retuine that I plan to play as a killteam of Astra Militarium … 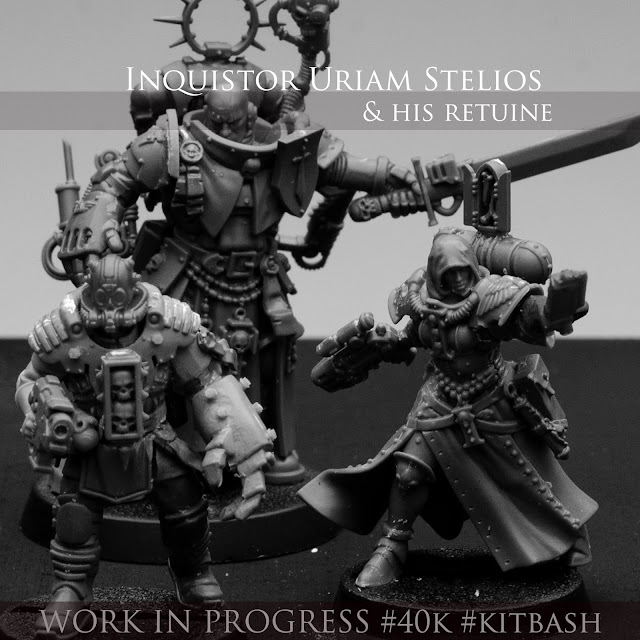 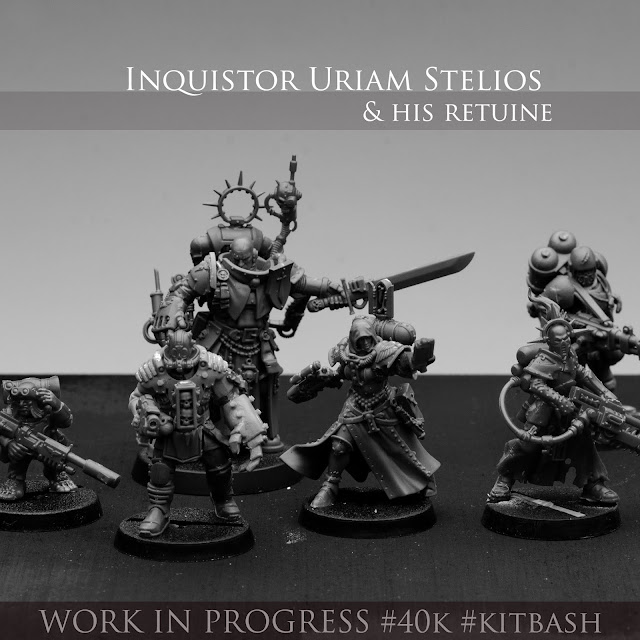 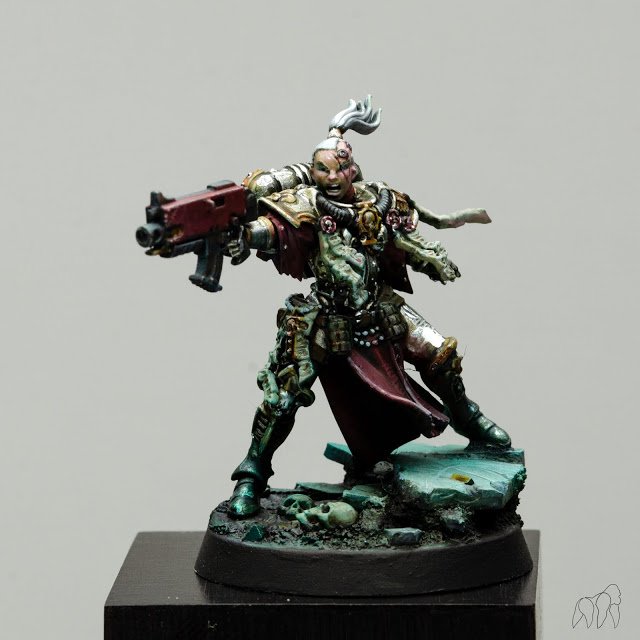 To Put up or Shut Up