Notice: The called constructor method for WP_Widget in heatmapthemead_social_icons_widget is deprecated since version 4.3.0! Use instead. in /home/miniaturegaming/public_html/wp-includes/functions.php on line 4716
 Knight of Dresda released into 28mm High Fantasy range | Miniature Gaming Guide 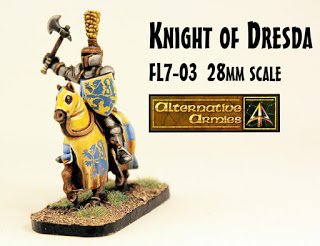 Posted on January 29, 2020 by Alternative Armies Leave a comment 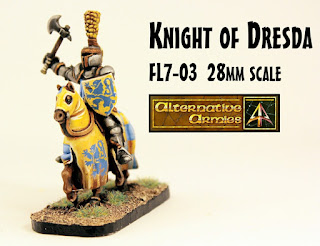 “Look at ’em. Prancing about with their fancy stuff lording it over us coz they have aspirations and such. Yeah, I know we are standing in the front ranks with the pikes in our hands and cheap broad cloth on our backs. But its an honest trade so it is; soldiering for your lord. Not like those jumped up fopdoodles behind us trying to climb into his lordship’s lap. Them lads will come to a sticky end mark me words. Yes, when the Orcs get here and the tussle begins proper like all that shiny iron plate and bright shields will do ’em no good at all. Any that survives will be no more than mumblecrusts. What’s that you say…them’s behind us and we is first to meet the Orcs and we ain’t got no armour nor shields…well that’s true…errr…well as his lordship said we is doing honest soldiering.”
Now released into our large range of 28mm High Fantasy miniatures a new mounted plate armoured knight.  A great miniature for fanatasy gaming and historical wargaming too. You can see it along with all of our other Knights and Footsoldiers HERE. 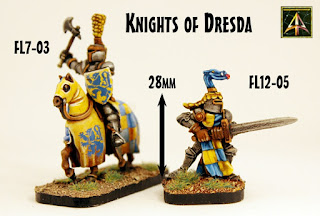 FL7-03 Knight of Dresda
This code contains two 28mm metal miniatures which when assembled at some 50mm tall. These miniatures are not supplied with bases and are supplied unpainted. Choose from a pack or three packs with a 10% saving applied. A plate armoured knight with axe and shield as well as a horse with saddle and caparison to which any design can be applied for heraldry.  The knight on foot shown is not included and comes from pack FL12 and is pose 5 therein.  Go HERE. 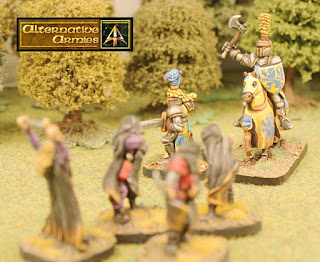 We have a great many miniatures great for fantasy gaming, dungeon crawl, roleplay and mass battle in 28mm scale.  Here is a list of all the ranges at Alternative Armies which are suitable for any game system.
Fantasy Warlord Range
Ganesha Games Range
Crystal Empire Elves
Dwarvish Hosts
Orc and Goblin Hordes
Adventurers and Wizards
Undead Legions
Barbarians
Monsters and Creatures
SHM Fantasy Range
The Torture Chamber  (please note Adult nature miniatures)
The Guild Room Scenics
Thanks for Reading,
GBS