This was a small commission that I couldn’t resist posting about because I really like all things genestealer. My own history with these chitinous, egg laying, hybrid making nasties goes all the way back to the release of the 1st edition of Space Hulk. Loved the idea of covens and cults as shown in the army lists in White Dwarf at the time as well. I had a couple of the metal hybrids and the running patriarch but that was it outside of the numerous plastics. Much later on I picked up the seated patriarch somewhere online for a real bargain by todays standards and then some years back I went on a little collecting spree and grabbed a handful of hybrids and more metal purestrains than I really should have. Of course my genestealers are sitting unpainted and gathering dust like most of my ‘projects’. Adding to that are the new generation of models acquired through 3rd edition Space Hulk and Deathwatch Overkill.

For this commission I was asked to follow the original studio paint jobs. I tweaked a few things as the original colour schemes are a little garish in retrospect but I think these a pretty true to those classic paint jobs. The last time I painted a genestealer I was a teenager and it was the early 90’s. Very few of my old paint jobs exist but there are a couple of plastic genestealers kicking around from those early days and I took a quick snap of three generations of painting.

On the left is one of my earliest attempts. Base coats, ink washes and drybrushing as prescribed in the pages of White Dwarf at the time. This could be from 1989, I forget when exactly I started painting these models. It would have originally been based on a metal gauze topped slotta for Space Hulk.

The middle model is from anywhere between 1990 and 1993 I reckon. This is where I discovered layering thanks to picking up a copy of Heroes for Wargames whilst on holiday. A much more sophisticated finish although still showing my lack of experience. This may have been a repaint of one of the wash and drybrush models.

Of course the one on the right is modern day with a fair bit more experience and ability behind it.

Anyway, enough rambling and rose tinted nonsense, onto the pics:

The big guy, the patriarch and magus advisor. A lot of work went into this as might be expected. A little daunting at first, especially the throne but once the base coats were on it really wasn’t as scary as first thought. 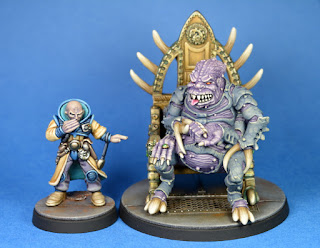 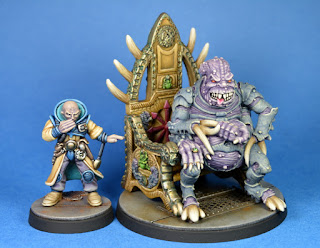 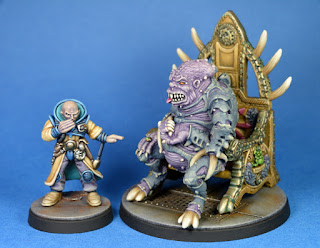 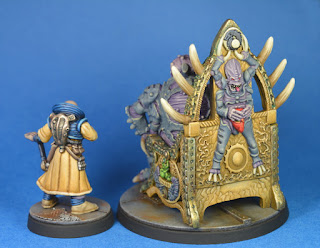 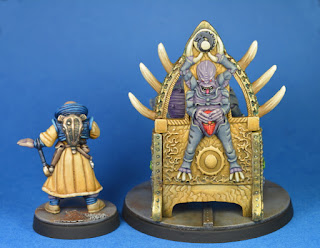 A trio of magus’s, magi, mag… whatever. I have to two Jes Goodwin models but not the Bob Olley sculpt. Always though there were three Bob Olley sculpts but it seems there are only two (the other having a staff)! 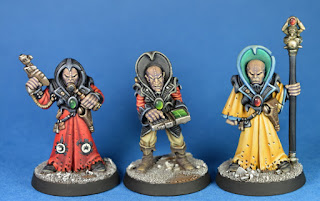 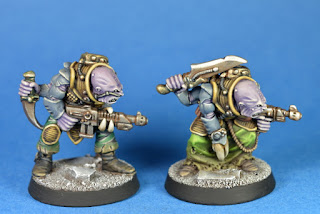 And finally the purestrains, the worlds most awkward models to photograph (bloody arms in the way!). 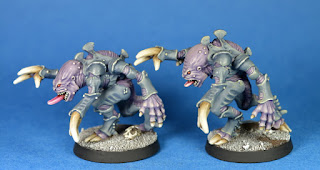 That’s it, next post should be on something I’ve painted for myself all being well.