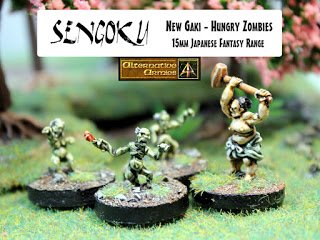 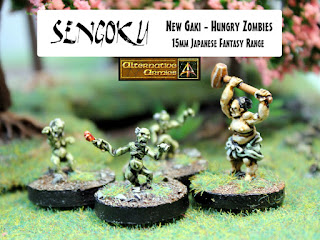 Now with over one hundred and eighty different miniatures the Sengoku range has expanded again with new models by John Bell for this month. Yokai, Creatures, Monsters, Samurai, Peasants, Scenics and much more.  This time three new single miniatures and a collected pack of them with a saving.  Go

“Gaki are spirits which live in horrible torment and are afflicted with constant suffering. They look vaguely human, but they have distended, bulging bellies and tiny, inefficient mouths and throats. They inhabit a parallel realm called Gakido. It is a barren place, full of deserts, wastelands, and other inhospitable terrain.” 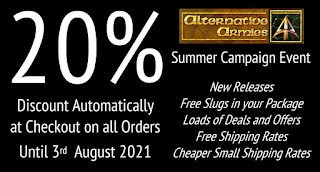 Above you can see Takemito the Sumo (SGF103) with his hammer hunting Gaki amid the cherry trees. 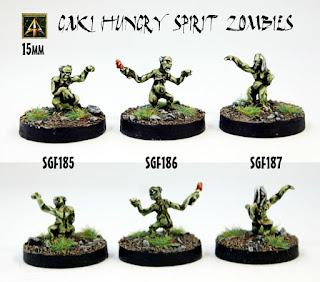 SGFP52 Gaki Hungry Spirit Zombies: This pack contains twelve mixed miniatures.  A random mix of three poses of Gaki which are hungry spirits or Zombies which are ideal low level foes for your hunters and samurai. Taken from codes SGF185,186 and SGF187.  The pack offers a small saving off the single purchase of these codes. Bases used in the pictures are 20mm round for scale comparison picture. Each of these new miniatures is in the range as a single code as well for maximum choice.

As the range has expanded we have gathered miniatures into bigger sets such as the second one SGFP7 Sengoku Set II which contains Buddhist Monks, Miko Maidens, Ghosts, Monsters, Fighters plus Snake and Spider demons.  Each of these sets is maximum value with a saving giving an array of models for your table. If you purchase every Set then you have everything which has been released in the range.  We are currently in the midst of ninth push towards a Set.