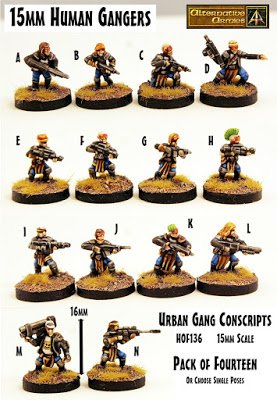 Posted on May 17, 2019 by Alternative Armies Leave a comment 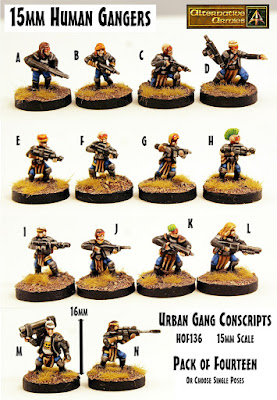 “Like minded individuals often gather together for mutual defence of themselves and their turf. It’s a strategy that humanity has employed from the early days of recorded history to the industrial work gangs in the mega cities of earth and Alpha Centuari. However colonial gangs are more often than not the first line of defence in case of siege and invasion as they are farmers and families who have gathered together to protect their holdings and claims from aggression. Once a colony has developed beyond a few small farms and a port is established, the gangs still exist, levying control on areas they claimed at the start of the landing. However other inhabitants may take offense to this and start their own gangs to take back these holdings. At other times they are sprung up from perpetually bored teenagers with little common sense and an eye for violence. On occasion they may even become notorious criminals or just a more militant version of the Planet Defence Forces. Their colours are as numerous as they have numbers, and are often used as a conscript force if things do get dire. Lightly armoured but heavily armed with cheap rec-guns and knowledge, their hold on their turf is absolute and can spring ambushes and raid supply convoys before melting back into spider holes to lick their wounds and strike again later. Their morale is often tied to their leader through a cult of personality, if he dies, they will run. But as most find out, they will be back in greater numbers and with more weapons to settle the score. Colonial life is harsh and brutal enough as it is, but these souls have opted for a more difficult life and will carve out their name and colours… or die trying.”
The brand new release for May 2019 into the HOF 15mm Science Fiction range is a mega pack of 15mm Gangers great for any campaign and setting. Concept by Fred Richards and sculpted by the talented Sean Bullough this pack can be had with all fourteen poses or select poses from it. Above is some setting for these vicious thugs and they are great opponents for your Security Force Alpha patrols or even as Betrayers slaved to the Shia Khan in games of Patrol Angis too. Go HERE for the range or read on for more. 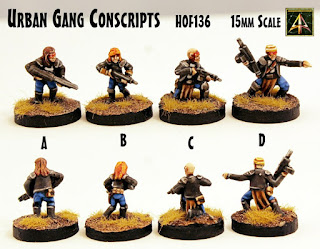 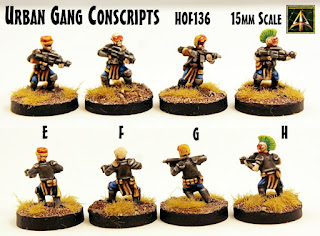 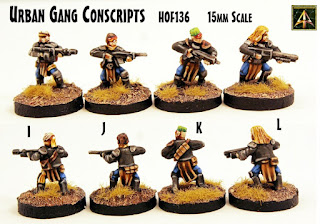 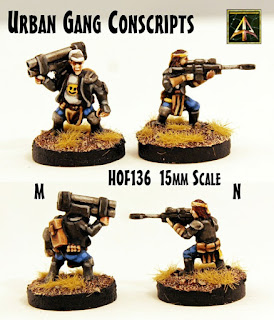 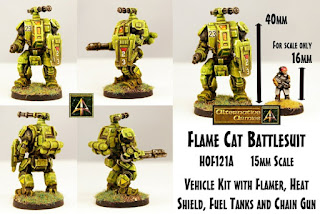 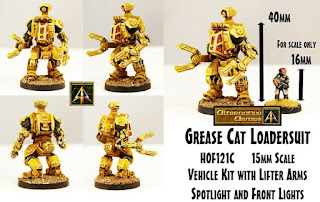 If you fancy fighting gang wars then Alternative Armies has a lot to offer you. For example what would happen if your gangers managed to get their hands on a fully functional battlesuit? Now that would liven up the cityscape! Check out the Fire Cat and also the Grease Cat for a couple of choices. The HOF Range has over one hundred twenty different packs.
Thanks for Reading,
GBS