The miniature range for The World of Valon (Flintloque and Slaughterloo and more) is huge and when it comes to mass battle we have a full array of ‘DAPs’ (Divisional Army Packs) for all of the armies that fight in the Mordredian Wars.  We are in the process of updating the imagery of these DAP’s.  The new photos of this division and the units which make it up come from our painting studio which produces many thousands of pro-painted and based miniatures each year to a fine tabletop quality and great price.  This division has already sold but you can see our current painted and ready to ship stock of units, sections, characters, specials and more for the World of Valon

The leaders of the Ferach Empire, these fine soldiers form the core of all troops under their Tyrant Emperor Mordred.  Some of the fastest and most motivated troops of the Napoleonique Wars of Valon. You can see the full range HERE. 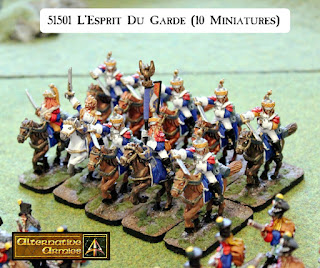 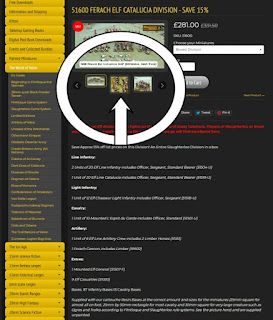 When you go to this division you can cycle through all of the new pictures by using the ‘left and right arrows’ to move among them.  Click on them to make them full size on your screen. 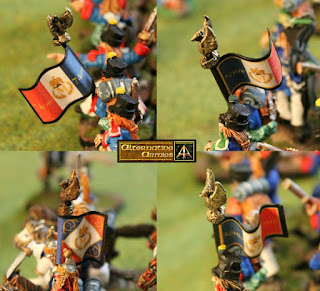 Every painted standard bearer which we sell always has a flag for his unit included.  The flags included free with this division are shown above.

Additionally the digital version of the massive 5030 Slaughterloo book is just 20.00GBP for immediate purchase and reading upon download.  Go HERE.

It is well worth the dedicated Flintloque player to consider the purchase of a Divisional Army Pack as the full units within it can also act as Sections in the skirmish level game.  This is common with players using a full DAP to make up a half dozen large Sections on foot and cavalry as well as a cannon and crew plus officers and casualty markers.  All with a 15% saving on single figure purchases and free bases too. 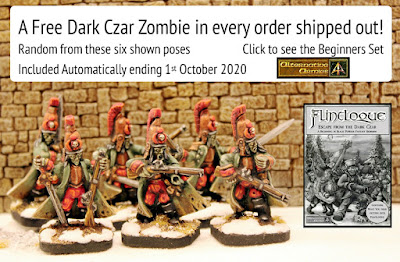 For the entirety of the month of September a freebie from Alternative Armies with a Dark Czar set Zombie (worth 2.50GBP) included free in every package.  Read this in full on our BLOG. Visit Begin in Flintloque PAGE for articles and video for the game.