Battle for the Vault

Dogma48 – The most exciting 48h in painting 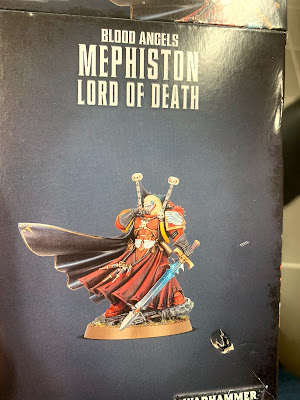 Hansrainer here. After 2019 turned out to be quite a painting slump due to many personal reasons, I made a resolution by the end of last year to pick up the slack and  start spending more time with the brush in 2020. I usually do enjoy painting quite a lot, but the longer the breaks get and the less I paint, the more I get frustrated by paint and brush not exactly doing what I want them to…

During last year’s SMC, I had a chance to attend a class/seminar by Tue Kaae on his way of self organisation and project handling for his painting projects – which by itself is an interesting topic for another article. One of the side effects of this class was learning about a painting event called “Dogma48” which is held biannually in February and August by the people of Chromanaut, a painting community/club based in Copenhagen, DK.

The concept is simple but inspiring:
You meet with about a baker’s dozen of other painters in the Chromanaut studio, a nice basement equipped with all the painters heart longs for and you have 48h to take a project from scratch to finish: That means you come with your kit, assemble, modify or sculpt, prime and paint a project within 48h – the event started on friday night at 7 pm and ended sunday 7 pm accordingly. For a rather modest fee, one of the club members provides excellent and tasty breakfast and dinner for everyone so there is barely a need to leave the premises except for sleeping.

The atmosphere, time pressure, comradeship
and suffering as a group of what most painters perceive as way to short a timeframe create a very special and inspiring environment. Having visited many painting classes exactly for this purpose (spending a weekend focused on painting with likeminded people), I decided I had to give this a try: And so, when the chance came around in November, I took the leap and jumped onboard.

In October and November, I collected several awesome project ideas (or what I took for awesome project ideas): A complex project for a figure swap I am planning to do on WME, an even more ambitious painting project, even trying to sculpt something for the first time. But as mentioned earlier, I was in a painting slump. In the end I took my own advice for once: KISS – if you are not familiar: Keep it simple, stupid!.

Instead of trying to do something elaborate, I ended up picking two simple project ideas and made it my goal to do something I often fail at: Stick with it for the duration. Also finish it: Accept that whatever I was going to have on Sunday evening was going to be IT: No corrections, no clean-ups, no re-dos.

The projects I ended up with were both GW gaming miniatures, infantry-sized in a somewhat simple setting: A plinth of the size of their intended base. The model should be the clear focus of my work and I would treat them as a study, something I hadn’t done in a while.

The first project
was the new model of Mephiston, Lord of Death, a highly detailed Space Marine character. Here was my goal to fight my constant weakness: Painting even and smoothly over large surfaces, freehands and achieving clean detailing work. The challenge here would be to take my time, not rush and avoid a sloppy execution, secondary goal would be the use of freehands and or textures on the wide flowing folds of his robes and cape.

The second project
was the Changeling, a Demon of Tzeentch, famous for its varying and free flowing form and characteristics. With him, the goal was to realize a concept I was playing around with for quite some time: Bringing a color circle on a miniature, again with a focus on a clean execution, taking the time to avoid a sloppy finish and learning more about how to balance the color on a simple piece. 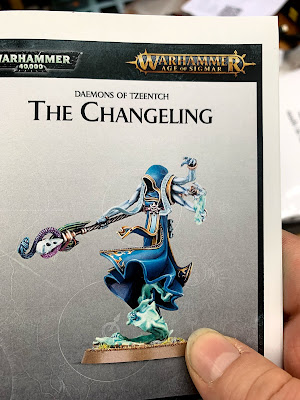 In order to leave the slump and be at least somewhat warmed up, I really tried to find the time in the weeks leading up to dogma and paint at least a little every other day. It was at times difficult to get off my butt and DO something, but I managed to paint at least half an hour or more every other day and after January had passed, it seemed that things started to look up a little and skill returned, if slowly.

Finally, travelling day had come, I was so giddy to meet all the cool people and spending a great weekend, I could barely sleep the night of Thursday to Friday. With a suitcase full of sweets, paint stuffs and colors, and carefully wrapped project material in my backpack, I took off towards the airport and off to Denmark I went.

Denmark is pretty cool:
The airport was nice and the metro is self propelled and you can actually sit right in the front row, directly at the windshield. After a short train ride that felt more like a ride in Disneyland I arrived in Copenhagen. First, I met with a few other participants: Ben, Jakob, Patric and Anna in a nice little brewpub, where Simon, my gracious host picked me up a little later and after a short detour to his place we went directly to the Chromanaut studio/workshop.

At the workshop we were welcomed by a small crowd that was already setting up their workplaces and getting ready to start:

We chatted briefly, then Torben served dinner – super tasty Baos with slow cooked beef and wide assortment of veggies.After the dinner, we had a few minutes left, Patric presented us with the awesome T-Shirts he had organised for all of us and then it was time for the traditional starting grappa (rumor has it that it was Dinos traditional grappa). 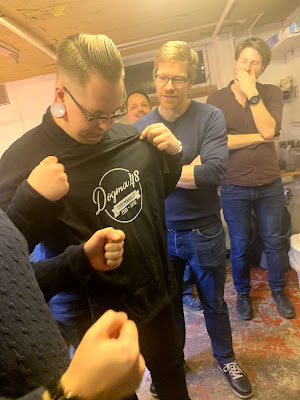 Anna helped me out by picking one project for me since I was in decision paralysis and off we went. The energy in the room was pretty amazing, sixteen people starting to work on different projects, quietly exchanging strategies and advice, starting to sculpt, shape, build and glue on the different works.

After less then two hours Tue was already filing down the basic mannequin he had sculpted for his project (and I learned Milliput can be speed-cured 🙂 ).

Four hours in, projects started slowly taking shape, I was trying out ideas for my base and how not to do it…

For me the Friday ended with a finalized concept, a primed miniature and base, a mockup of the base design and a plan how to continue during the next two days. I think Simon and I called it a night around 1 am and headed back to base to catch some sleep. We heeded the advice given to get enough rest, and pace ourselves.

Saturday I felt a little under the weather and we started a bit later around 11 – most people were already working hard. Everyone I talked to beforehand had told me, that saturday is the day that makes or breaks the project and that careful but decided progress was the way to go.
Torben had organised a nice breakfast of coffee, rolls and danish pastries (now I know why they are called danish…) and while we were snacking, I had the chance to take a round of pictures before starting my own work again:

About three hours later, I finished my first color sketch and managed to walk around the workshop admiring everybody else’s work. I was amazed about how many were still sculpting and building and highly unperturbed by the passing of time.

After that it was time to enjoy a bit of the nice spring sun and take a short walk through the neighbourhood.. 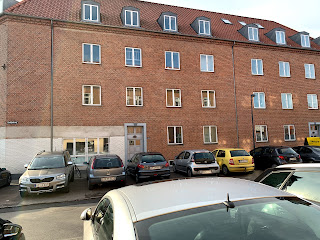 By Dinner (Spaghetti!) pretty much everyone had wrapped up and primed and started painting (except Tue who decided to focus solely on sculpting this year): Unsurprisingly, under such time pressure, airbrush was a heavily used tool. Also, whenever anyone had a question or a request for support, one or more of the other participants immediately offered help and advice, making the whole time a very relaxing and positive experience.

By the end of the day, the final vision of all projects became more and more apparent, Simon and I called it an early night this time, trying to preserve some time for the final sprint on Sunday. Here are the final impressions I collected on Saturday.

Sunday morning arrived way earlier than I hoped for, but a few cups of coffee and danishes helped me get back to the painting table. Unfortunately the work of the last few days started to show and I focused a lot more on painting, polishing and finishing my own piece and not so much on taking pictures. However, Sunday is the point where everyone puts in crunchtime and I honestly wasn’t sure it would have been fair to disturb the others even more than I already did to take some pictures.

Still, here is a short dump of all pictures taken during the day:

I reached my personal finishing point around 5 pm, others a bit earlier or later, but some also kept working until the last minute. Those of us that had finished their work retreated to the back room to have a quiet chat over a cup of coffee and some leftover snacks and breakfast while trying not to disturb the others.

At 7 p.m. sharp Frederik went over to the others and ushered the command “Brushes down!”. Everyone (well, Anna took a few seconds :D) wrapped it up and we started to put the final works on display: 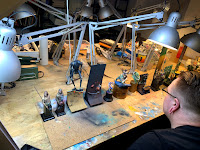 The overall quality and variety of results was more than impressive to me and I think the pictures don’t do them justice.

After that we cleaned up our sh… and went to a nice dinner to a Thai place in the end.

Dogma 48 was the most intense and one of the best painting experiences I have had in my painting career so far: The mixture of focus, support, inspiration, pressure and fun was intoxicating and I can’t wait to do it again.

I met or got to know better a bunch of really awesome people, got to start and finish a project that I consider arguably my best work yet. So I can only recommend to you: Try it at least once! Chromanaut usually reserves a few spots for international attendants. Copenhagen is a really nice, tourist friendly city and worth a trip in an by itself. And if you find the idea inspiring but shy the travel: Maybe do something similar at home with some friends. The experience of a pressure cooker of art is soooo motivating and inspiring°

Thank you guys, it was a great time! 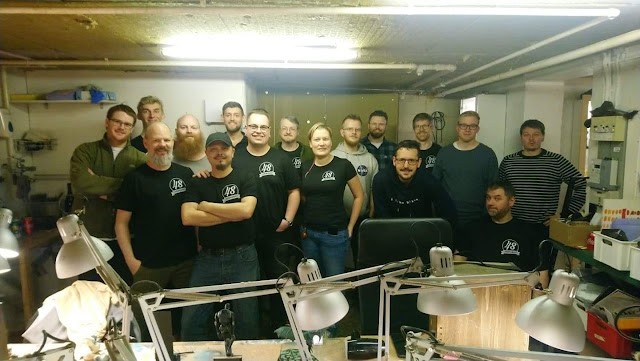 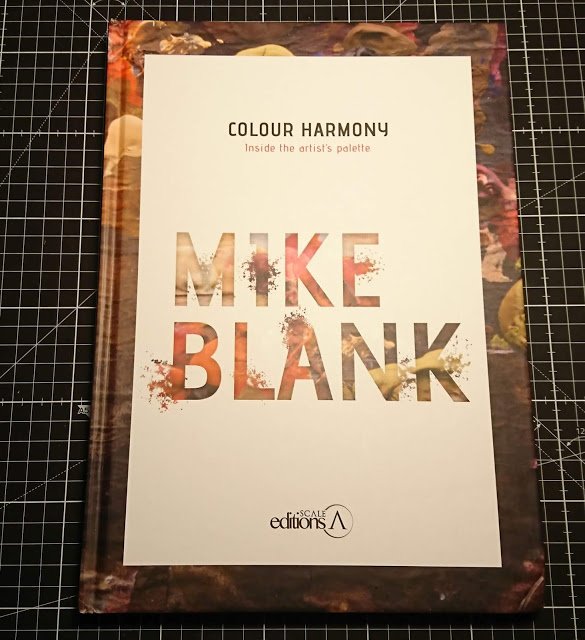 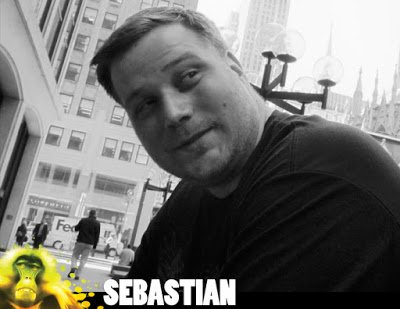 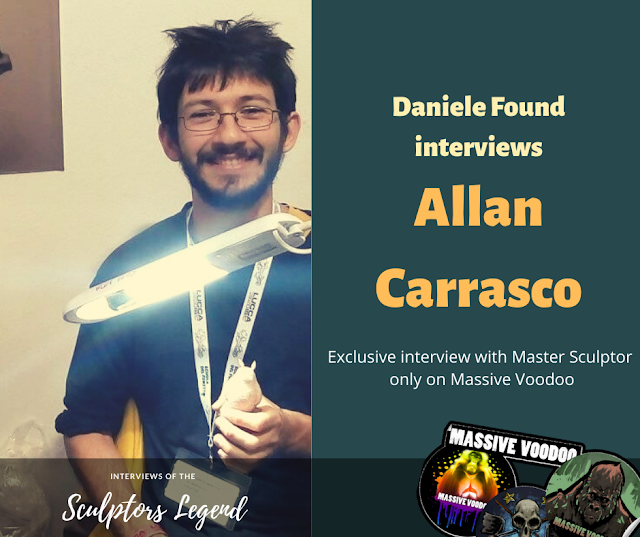 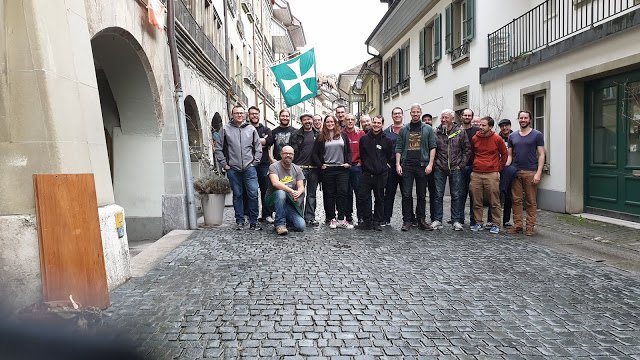 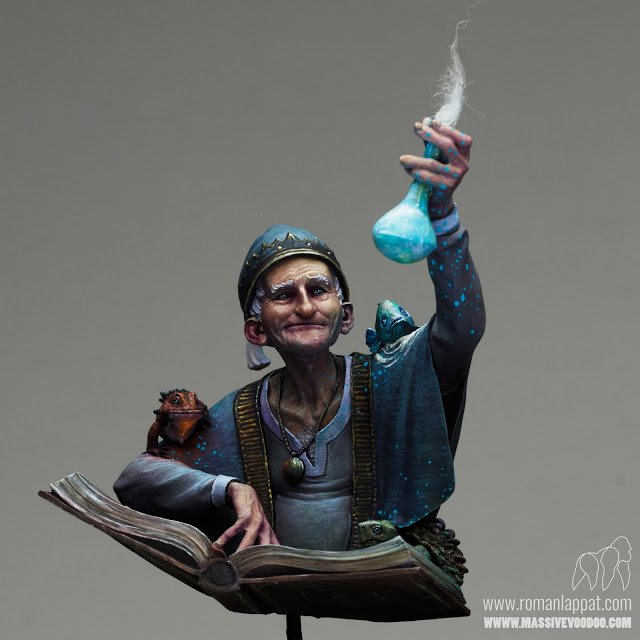