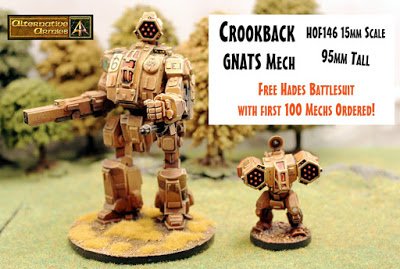 Posted on January 13, 2020 by Alternative Armies Leave a comment 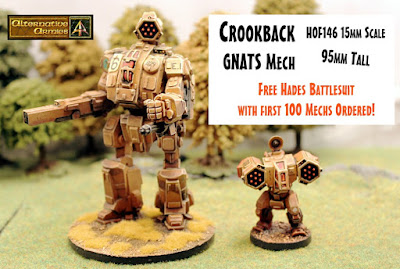 Back in September the HOF131 Contender GNATS mecha was released at Alternative Armies.  Now our second 15mm scale big mech is here!  The Crookback is a front line machine in the USGC (United States GNATS Core) and among the biggest fielded. Go
The ‘Giant Neuro Assisted Titanic Soldiers’ have a second front line mech now.  With more firepower than several main battle tanks it joins Security Force Alpha (SFA) Humanity and its more than a platoon of infantry poses as well as specialised troops, battlesuits, bikes, portable weapons, light and medium vehicles plus drop pods and drop coffin. 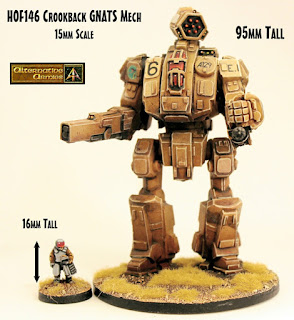 HOF146 Crookback GNATS Mech
This 15mm scale high quality resin kit contains all the pieces needed to assemble the Crookback GNATS.  Standing at 95mm tall when assembled it has ten pieces which create a durable model made for use on your gaming table.  GNATS stands for ‘Giant Neuro Assist Titanic Soldiers’ and they are the ultimate weapon of battle.  The model is easy to assemble. It is supplied unpainted and unassembled without a base (base shown is a 59527 75mm Round).  You can select one or three kits on screen and taking three gets you 10% off the price. 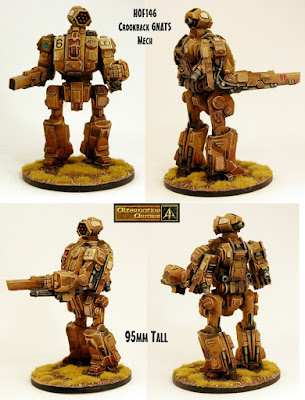 Other miniatures from the HOF range are shown for scale only (SFA Trooper is 16mm tall).  The Crookback is armed with a heavy 56MJ rail cannon (34lb Projectile) as well as a 20mm rotary machine cannon and a centrally stationed top hull turret seven slot missile pod.  It also has a number of point defence lasers for small scale anti-infantry and material tasks both front and rear. It has rocket pods fitted to its rear to allow easy balance and stance regaining.  Crookbacks are front line units in the USGC (United States GNATS Core).   It is a tier two GNATS meaning it is a main battle size machine.  Go HERE. 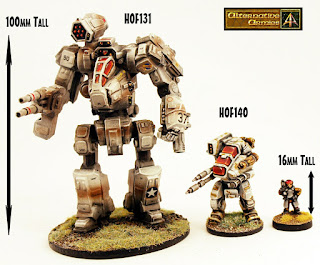 HOF131 Contender GNATS Mech
This 15mm scale high quality resin kit contains all the pieces needed to assemble the Contender GNATS.  Standing at 100mm tall when assembled the Contender has eleven pieces which create a durable model made for use on your gaming table. The Contender is armed with a twin barrel 90mm automatic cannon with ammo hopper plus an under arm 130mm howitzer and a top hull turret seven slot missile pod. Contenders are front line units in the USGC (United States GNATS Core).   It is a tier two GNATS meaning it is a main battle size machine.  Go HERE. 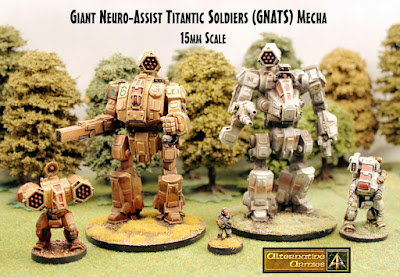 There will be more information on GNATS this year as well as the near future world of the 2080’s in which these giants of war face their foes.  In the meantime if you have questions please do ask us on sales@alternative-armies.com. These are all of our 15mm releases for the month of January and thank you for your custom.
GBS