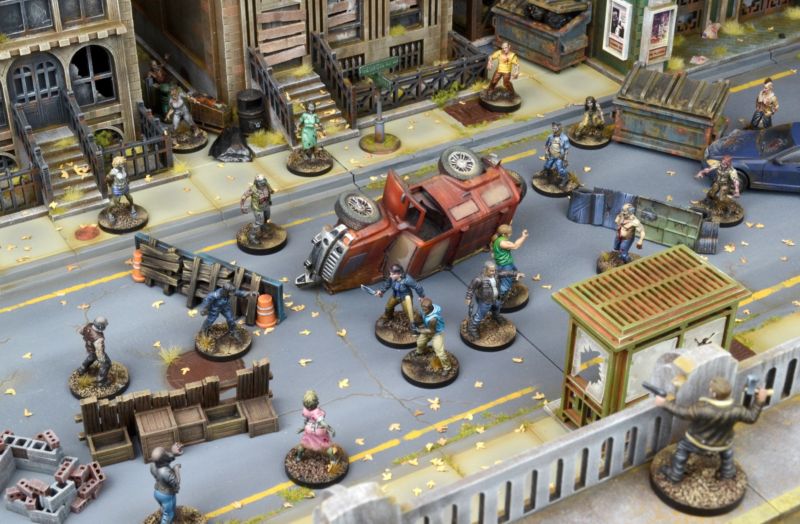 Posted on January 5, 2020 by MGG Official Leave a comment

Ronnie here and it’s
my turn to take over the blog! Mantic launched The Walking Dead (TWD) back at
the end of 2016 – yeah, I know right? Seems like it was just yesterday.

It was a massive success both at retail and via the Kickstarter. Over the following years, we added to the range with cool direct to retail lines, then wave 5 (The Hunters) was a brand-new release direct to retail. We followed that up with Here’s Negan and Call to Arms – a more skirmish PvP take on the story – to reflect how the weapons and the character tooled up as the story progressed!

Considering that The Walking Dead has been around so long, it’s still one of Mantic’s top-selling ranges, with an active community and a very creative tournament scene, kept going by the likes of T&G Productions.

If you know what’s
happened in the comics this year, you’ll be aware there’s been a major shake-up
(no spoilers here). But look, even if the comics have undergone some ‘changes’
– ahem – and the TV series is only
getting 16 million viewers a week – we’re still up for supporting The Walking
Dead: All Out War and Call to Arms… if you are too

Looking
ahead in the storyline, compared to where we are now, there are many stories to
play through and neat characters to sculpt and add to the collection.

We know last year was a bit slow for All Out War releases. With Call to Arms and Kings of War (plus support for Vanguard and Deadzone) we had a bit for everyone, but not enough Walking Dead for some. Well, we are coming back like the dead rising!

It all kicks off with the
Hilltop storyline in March – and we’ll be bringing some of the sexy, new stuff
to Adepticon too. In March/April we’ll be releasing Rick (Alexandria Leader) Booster,
Aaron and Rick Booster, Heath Booster, Jesus Booster and Maggie (Hilltop
Leader) Booster.

Alongside (or hot on
the heels of) that we have a very comprehensive support range to add to the
retail release featuring one of the surprise top sellers in the whole Walking
Dead launch. You might be shocked to hear that after the core game itself, the
top selling line was… drum roll please… the Scenery set. You know, the set with
the cars, barricades and objective markers (which also double as very nice
scatter bits). Now we don’t think all those bits just sold to Walking Dead –
and we don’t expect the same here – but they do fit mighty fine on those
Walking Dead themed tables I have seen you all building!

This year we are releasing the full zombie apocalypse/contemporary warzone pieces from the second TerrainCrate Kickstarter! So now you will absolutely have no excuse for not building the nicest gaming tables of any system

And one of those sets works rather well with the Here’s Negan game – just in case you wondered!

But it isn’t all about
the sculpts – we also have the Walking Dead Gamer’s Omnibus (working title!).
We will pull together all the scenarios from waves one through five, add more
AOW scenarios covering the next phase in the story, then add a few new
scenarios for Call to Arms. There will also be extra scenarios, like Rick
clearing the prison (using the tiles from Here’s Negan). The result will be a
book that collates everything together for The Walking Dead in one awesome collection.

If all that isn’t interesting enough… King Ezekiel will be this year’s show exclusive. He will be making his debut at Adepticon and Salute, then online for the May Mantic Open day – for those who can’t get to shows.

And no doubt you want
me to leak what we are sculpting next. Well I won’t shout about it, but I might
whisper it at some point

Have a great 2020, and
thanks for all the fantastic support we have had for everything Walking
Dead-related in 2019.

The post Christmas Blogs: The Walking Dead in 2020 appeared first on Mantic Games.