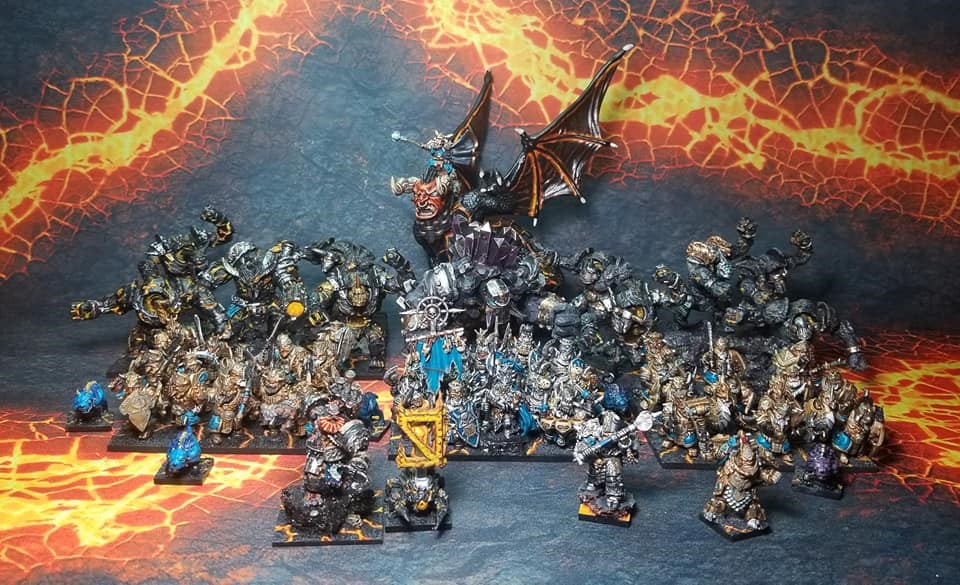 Recently we stumbled across a beautifully painted Abyssal Dwarf army by Brad Jimenez. We had no choice but to reach out to Brad and see how this army came together and see what else he has planned in the future.

Let us jump in!

Tell us how you came across painting a whole Abyssal Dwarf Army?

I have always had a thing for dwarves/dwarfs of all types since first playing Dungeons and Dragons in High School.  After that I picked up tabletop gaming as a hobby, I made sure to collect a dwarf army for whatever game I started playing.

The Great Winged Halfbreed by Mantic, caught my eye when it released.  It was a bargain and a great sculpt (hefty too!), so I had to have it.

Fast forward 2 years (which was 2 months ago) and I had been watching Andy Ransome on his YouTube channel and his work inspired me to start an Abyssal Dwarf force.  I had the Great Winged Halfbreed painted up already, so I altered the paint scheme of the Ironcaster to more reflect some unofficial art from a few years back that was done for GW’s Chaos Dwarves.  I had to do more!

Mantic had just come out with new Abyssal Dwarf models for Vanguard/KoW so I decided to dive in using the color scheme of that old army book on my Blacksouls (Gold and Turquoise). The Immortal Guard I wanted a different scheme from the Blacksouls but, with the turquoise tying them together. The Lesser Obsidian Golems and Greater Obsidian Golem were in a common stone theme with lava in the cracks.  I have two different styles of the Overmaster.  I painted one to reflect the Blacksouls and painted the other one to reflect the Immortal Guard.  The Infernox and Hexcaster were fun to paint up too!

Have you had a chance to play with your army yet?

Nope, but I have been stirring up my community as much as I can through sharing pics of my finished models.  Hopefully, I will have a few people champing at the bit to start playing a game after this pandemic is over with. So if anyone out there visits or lives in Southern Florida you can find me at HEY WANNA PLAY game store or Docking Bay 94 Comics and Games!

Your color scheme is distinct, yet keeps with the theme of the army, how did you settle on these colors?

I sort of used the cover a fan made tourney Chaos Dwarf army book for WFB.  My turquoise is a little bluer based than the greenish turquoise on the cover, but I am quite satisfied with the outcome.

Of the units in your army which one was the most fun to paint?

The Immortal Guard.  There was a bit of conversion work on the banner I am quite satisfied with and the Iron Guardian has a lot of filigree that was enjoyable to highlight.

Do you plan on adding any additional units to the army in the future? If so, what would be the next model or unit?

Jeez, yeah!  I need to get some Halfbreeds, a Halfbreed Hero, artillery, Grotesques, a Grotesque Champion, Hellfane, some Slave Orcs, and Gore Riders.  I have a Slavedriver and Ironcaster on foot coming in soon. So pretty much everything that Mantic makes!

So, what is next after this? Is there another army plans?

I want to collect a few Giants.  Let us see what else is in store for the ogres….