A Duel in the Stars

A Duel in the Stars

Prizes and Event Details for the 2019 October World Championships

“Permission to hop in an X-wing and blow something up?”
–Poe Dameron, Star Wars: The Last Jedi

The fate of the galaxy hangs in the balance, and your time to make a difference has finally come! Join us this fall for two 2019 World Championships on October 16–20! For five days, the best competitors of Star Wars™​: Destiny and Star Wars™​: X-Wing will gather from all over the world to contend for top-tier prizes and the chance at becoming a world champion! Hosted at the legendary Roy Wilkins Auditorium at the Saint Paul RiverCentre in Minnesota, this year’s events are sure to be bigger and better than ever!

As the pinnacle of all Organized Play events, not only do the World Championship events offer a venue where you can challenge the best players on a scale like no other, they also offer a variety of fun side events with a multitude of exclusive prizes. This is a once-a-year Star Wars extravaganza and an incredible way of celebrating your favorite game with other players who share your passion.

It’s not too late to make a difference in the galaxy—tickets are still available! Star Wars: Destiny players may purchase their tickets here or players who already have invitations may claim their seats now. The deadline for reserving your seat is on September 30. Star Wars: X-Wing players who have yet to score an invitation to this year’s World Championship may purchase a ticket for the Last Chance Qualifier, where the Top 64 players will qualify for Worlds. Even if you don’t qualify, you are still free to play in all side events throughout the weekend! If you do have an invite, make sure to claim your seat by September 30.

Jump into that X-wing and reach the stars! Here are the full details on the schedule, as well as get a sneak peek at the prizes you’ll be competing for this October! 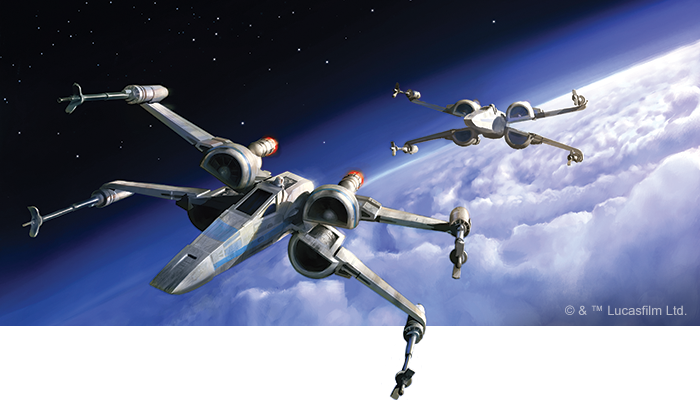 For five action-packed days, heroes and villains will clash in epic lightsaber duels, pilots of X-wings, TIE fighters, and other iconic ships will engage in incredible dogfights, and the balance between light and dark will shift as these epic Star Wars conflicts come to a head.

Each year we strive to make the experience of the World Championships more exciting and robust than ever before, and this year, we’re setting a whole new standard. In addition to the main events, we’re featuring a blowout of thrilling side events at the renowned Roy Wilkins Auditorium! Between Star Wars: Destiny and Star Wars: X-Wing there are more than twenty-five side events available to attendees.

Don’t miss these events! Get the full breakdown by downloading the World Championships schedules below. We will also be sharing our full streaming schedule for these exciting events soon! 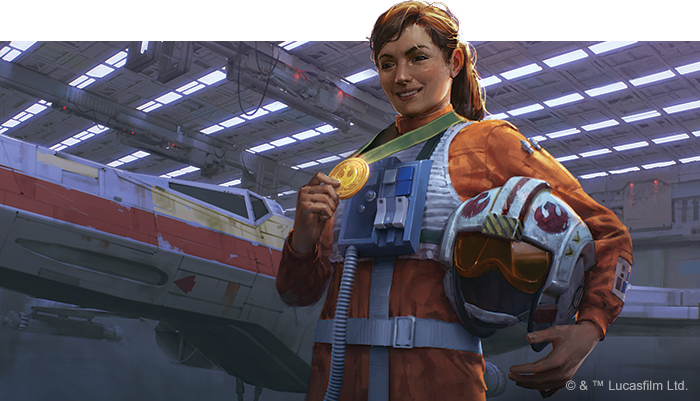 Prizes, glory, and the thrill of spirited competition—at the 2019 October World Championships, it can all be yours!

Enhance your game and commemorate your Worlds experience with extended art cards, premium tokens and dials, stunning art prints, playmats, tote bags, backpacks, and of course, trophies! All of this and more will be available for players to win. On top of participation prizes and the wide array of placement prizes previewed below, players will be able to spend prize tickets to lay claim to the rewards available at the Star Wars: Destiny and Star Wars: X-Wing prize walls!

Now here is a look at the prizes you can win through participating in these exciting events!

A fabled cast of characters that span the entire Star Wars saga clash in the fast-paced game of “what if?” duels, Star Wars: Destiny. Whether you team up with heroes like Obi-Wan Kenobi and Rey or villains like General Grievous and Kylo Ren, the Star Wars universe opens up like never before as you play out nearly any confrontation that you can imagine. Filled with Jedi, Sith, bounty hunters, pilots, scoundrels and more, all of these beloved characters are found in the game while letting players experience the various strengths and abilities of these classic characters.

For the 2019 October World Championship, the diversity of these characters is further exemplified through the numerous rewards you can win!

The Star Wars: Destiny prize wall will feature a wide assortment of prizes, only some of which are shown below! Among these previewed prizes, you’ll find clone trooper and clone commander helmet shield tokens, promotional cards that feature newer additions to the Star Wars universe like Poe Dameron, Iden Versio, and Enfys Nest as well as classic characters like IG-88, Yoda, and Darth Vader. A playmat of three Ewoks set against a space nebula will be one of the many playmats available to World Championship attendees. In addition to these prizes, you’ll find many more rewards that are unique to the prize wall which are attainable with prize tickets, including more promotional cards, tokens, and playmats! 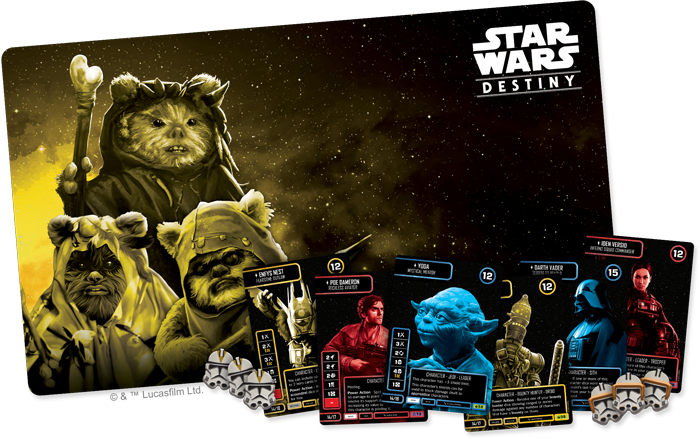 Simply for participating, Star Wars: Destiny players will receive a deckbox of Darth Vader and Luke Skywalker’s final confrontation abroad the Death Star II, as well as a pair of prize tickets to kickstart their prize wall venture! Players will also earn two additional prize tickets per win and one prize ticket per loss during the main events. There will be many more opportunities to earn prize tickets throughout the weekend, as side events will be following a similar structure for awarding prize tickets. 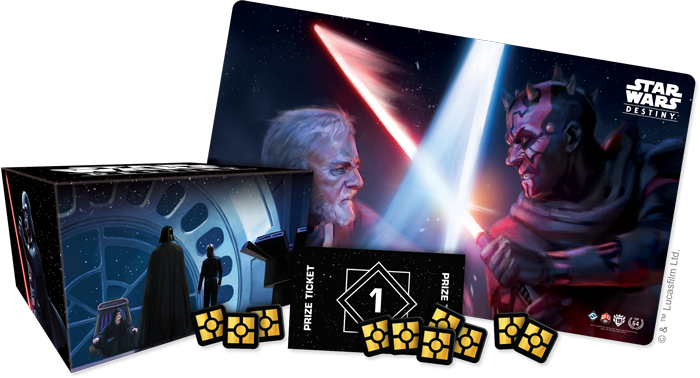 The winner of the Star Wars: Destiny World Championship will be awarded with a one-of-a-kind playmat featuring a stunning illustration of Amilyn Holdo’s heroic sacrifice to save the Resistance transports during their desperate escape to the world of Crait. Due to her selfless act, Vice Admiral Holdo was able to cripple the First Order fleet as her jump into hyperspace decimated their forces and cleanly cut Supreme Leader Snoke’s flagship, the Supremacy, in two. Along with the other rewards and prize tickets gained along the way, the renowned champion will also receive a unique trophy (not pictured) denoting their impressive achievement! 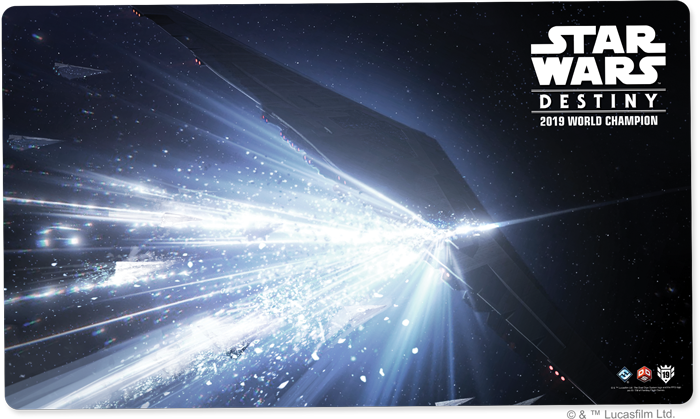 Star Wars: X-Wing places you directly in the cockpit of a starfighter, as you try to outwit and outmaneuver enemy squadrons amongst the stars! At the 2019 October World Championship, you’ll find a host of prizes suited for an ace pilot. No matter what faction you fly, or what ships are in your squadron, these rewards are designed to be a direct reflection of your skills as a squadron commander.

Maintain your target lock on these prizes as rival pilots will be gunning for the same rewards! Your opponent will not hesitate to strike. Keep your aim true and follow through!

Taking part in the Star Wars: X-Wing World Championship yields several exclusive prizes, including a spread of promotional cards including Plo Koon, Delta 7B and Battle Meditation! Depending on your chosen faction, you will also be given three extended art cards, such as Trade Federation Drone, Delta Squadron Pilot, and Contracted Scout. Day 2 players will be rewarded with a copy of each of these extended art cards, no matter which faction you fight for!

Finally, simply for participating, each player will also be given a pair of prize tickets. Additional prize tickets may be earned via side events or achieving top placements in the main event. These prize tickets can be turned into a number of rewards that are unique to the prize wall like extended art cards, acrylic tokens, alternate ship punch, tote bags, and art prints! Through the use of these prize tickets, you’ll be flying in style in no time. 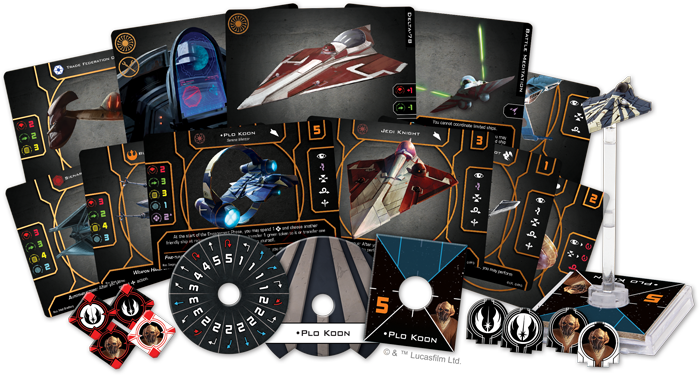 Players who make their way into the Top 64 (per flight) will be awarded with silver-and-green focus and evade tokens. The Top 32 players (per flight) will receive a red-and-black range ruler with the World Championship symbol, denoting your accomplishment at this high-level event! During the final elimination rounds on Saturday, the Top 32 players will be given a unique Plo Koon damage deck.

Only the most skilled squadron commanders will break into the Top 16 during the elimination rounds and their efforts will be greatly rewarded for doing so! These players will receive a full set of maneuver templates to complement the range ruler set they previously won in the Top 32 cut, and they will also be given a copy of each promotional card below, like Kylo Ren, DFS-311, and Kare Kun. Separately, the Top 16 players per faction will also receive a copy of their faction’s card as shown below. 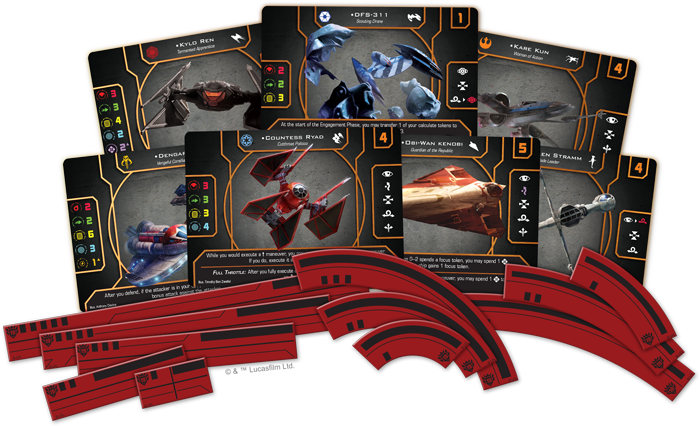 The top player per faction and per day will be awarded with a striking black and gold magnetic template tray emblazoned with the symbol of their faction. As previously mentioned above, faction loyalty will be further rewarded with various other prizes like sets of extended art cards and maneuver dials. Finally, unique trophies (not pictured) will be awarded to the finalist and of course, the sole ace pilot who seizes victory and claims the coveted title of World Champion! 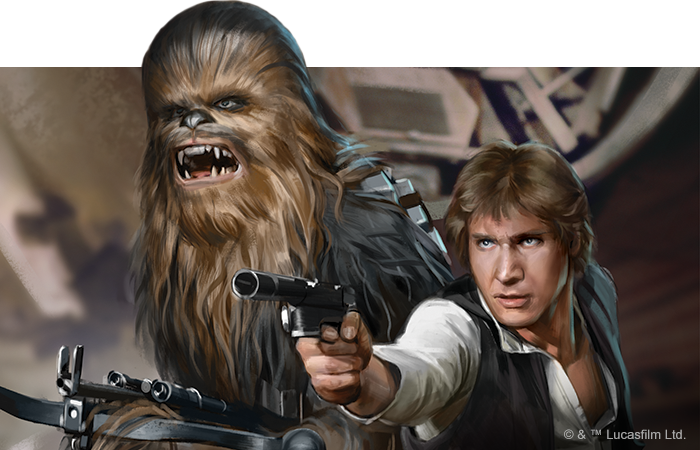 At the 2019 October World Championships, you can celebrate your favorite game while taking part in the highest level of competition! Immerse yourself in the Star Wars universe as you win amazing prizes, make new friends, and create memories that will last a lifetime. Don’t miss out on this exceptional Star Wars gaming experience!