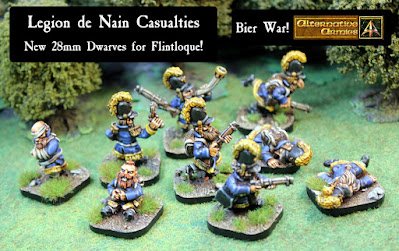 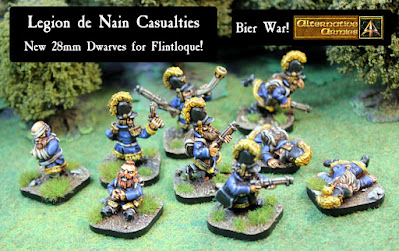 “We wept.  All of us.  Dwarf killing Dwarf it was a nightmare and more it was all the plan of the tyrant Mordred.  To weaken us so that we might be brought under his bejeweled thumb and put enmasse into his armies.  I watched the wounded walk and be carried from the field at Fassbier as the roar of musketry sounded like thunder.  Later when only smoke and horror remained on the field we went looking for our Nains who had fallen.  Some we found.  Others..well they were so parted that none could name them.  I did not sleep for days.” (Major Ulf von Slackblatten 1st Legion de Nain)

Above you can see the Legion de Nain skirmishers mid action with some of their number reduced to walking wounded, grounded or killed in action.  In the second of our specialist driven pack codes (following up on the Veterans last month) we present Legion de Nain casualties.  Four Dwarves uniformed to match up with the rest of the Legion and in poses to mix into your force during play.  The legion has doubled and then doubled again in size and you can read all about it on our blog using the Bier Wars TAB. Go HERE for the Confederation of Finklestein on the website where all these miniatures reside. 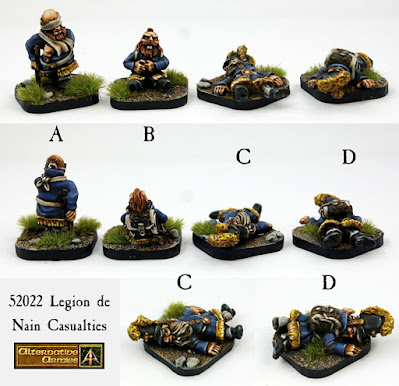 52022 Legion de Nain Casualties: This pack contains four different 28mm scale metal Dwarves which are at home anywhere in the Legion and ideal in play to represent the result of action!  Choose from the pack or select a pose from the pack (A to D). All are dressed in legion uniform. They are a bare headed Dwarf with an injured leg using a walking crutch, his arm in a sling and his eyes covered due to injury too (A), Dwarf sitting with a gut wound mouth open in pain (B), Dwarf in full uniform laying face up deceased (C) and Dwarf in full uniform laying face down deceased (D). Go HERE. 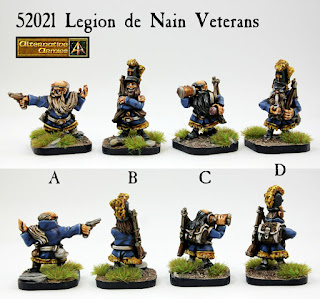 As we progress more releases will happen monthly as we expand the Legion de Nain and work towards it as a full force of all arms (the biggest ever expansion to the miniature range for a single army) we will also be slowly putting together a Flintloque campaign book on the Monich Bier War too.  There are now forty six different Dwarves in the Legion.

If you would like to get into Flintloque in the lands of the Dwarfs then look no further than 5028 Beir and Bones  game book.  On its own with full rules in print or as a digital download or as a shilling starter pack with miniatures and scenarios. If you have any questions please contact us on sales@alternative-armies.com and ask. 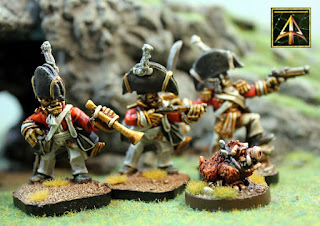 We hope you like this new rather sad release (war is hell even on Valon) and this is our only Flintloque and Slaughterloo release this month but keep an eye out shortly for a rules bolt on for Flintloque making use of the free in September Pig Dog (placed in all orders shipped; see it HERE).